Since the success of Game Of Thrones (the last 2 series not withstanding) the search has been on for the next big swords and sorcery extravaganza. While the Shannara Chronicles managed to just miss the mark, partly due to a complete lack of a realistic post apocalypse settings, and Robert Jordan’s Wheel Of Time series is still some way off yet, Netflix has stepped up to the mark with the adaptation of Andrzej Sapkowski’s The Witcher. For fans of video games there’s a long history of near misses and and outright disasters, and most people watching The Witcher will be fans of the video games. Thankfully the games stay fairly true to the books so the TV series is accessible to both fans of the books, and fans of the games.

For those that aren’t aware of either the story follows the titular Witcher, Geralt of Rivia, played by Henry Cavill. The casting works remarkably well if you’re a fan of the video game, I don’t think they could have gotten any closer to the look of the White Wolf without compromising on acting ability. As with the books and the game there’s also the story of Ciri interwoven into Geralt’s tale. It’s the way that the two stories unfold that has to be the greatest criticism of the show, it’s not until the fifth episode that it starts to become clear that the two stories are being told asynchronously, Geralt’s tale spanning years, even decades, while Ciri’s spans only days, or weeks. This all comes to a head in episode seven when Geralt and Ciri’s stories finally align. Once the mental leap is made the earlier episodes make a lot more sense, and the clues to the timelines more noticeable.

Fans of the games will also see a whole host of familar characters, Yennefer and Triss being just two of the many strong female characterisations. We also see the bard, Dandylion, although here using the original Polish name of Jaskier. Jaskier’s character is played to brilliant comic effect, and at times you really do have to feel sorry for him. While the usual tropes are played out, with plenty of naked flesh on display, they are played with purpose. True to the swords and sorcery genre there’s plenty of both, and the choreographing of the fight scenes really stands out. Magic is well thought out, and there are consequences to magic use. One of the running themes throughout is Yennefer’s quest to reverse the effects of magic on herself.

If you manage to get past the first few episodes you can expect to see more of the story tying itself together, and it’s a story that is well worth the wait in telling. At times it can seem a bit slow in unfolding, not least because of the timeline issues, but as things start to converge the show ramps up the excitement. By the time you get to the end of the final episode you have a battle worthy of some of the best Game Of Thrones episodes, as the mages on both sides fight over the entrance to the North. With plenty of lore from the books and games still to unfold it’s looking like series two will start off strong. There’s more to tell from Jaskier, and the love story between Yennefer and Geralt to resolve yet. There’s also the bigger political picture that has been hinted at within series one. Fans of the games will be aware of just how much is still to be explained.

In summary, while it’s not Games Of Thrones at its best, it’s certainly better than Game Of Thrones at its worst. If you’ve played the games there are plenty of Easter eggs, from monsters to kill to location designs. The costume and set designers have clearly used the games as an influence, but there’s also enough input from the books to keep the gamers guessing about the direction the show is taking. 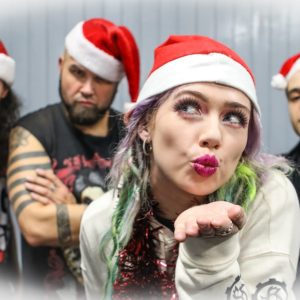 'Tis the season to be jolly, eating yourself into a food coma and hopefully having a great festive time.  But where do all the bands...
Copyright 2017 Devolution Magazine. All Right Reserved.
Back to top