Danii, Sue, Kay, Becks, and Bob. It sounds like a really bad remake of a classic comedy film, but it’s not. It’s actually the Diablofurs. Mark Bestford caught up with the Nottingham rockers at Rebellion to discuss the best music for the end of the world, the Twilight Zone, and how concentrating on just the band you’re in makes the band who they are.

Sue “Yeah, we’ve got some really good sort of catchy pop tunes with some really awesome riffs, drum beats and some fantastic keyboard.”

Danii “With a nice added dose of chaos.”

Danii “Punk is just where it meets for everybody really but there’s a lot else going on.

Sue “We’re not a band that people can really pigeon hole, so obviously punk, or even this, that, or the other. We’re just sort of…”

Danii “Except we’re a pop band.”

Sue “We’re a good little pop band that people can dance to and sing along.”

Where’s the band based?

What’s your favourite episode of the Twilight Zone?

Bob “The invaders episode with the farmhouse, with Agnes Moorhead where she’s trapped and a little spaceship comes down and there’s a little robot alien, kind of terrorises her. That’s one of my favourites. But there’s a few that are great you know. There’s one where the guy breaks his glasses at the end, that’s a classic one isn’t it.”

Sue “Is that the one that’s got the little cat in it, or, which one’s that? There’s one with a little animal in it, a little cat or something that a lady keeps feeding. It’s a while since I’ve watched any.”

Bob “Oh, the one with Billy Mummy in it where he can kill everyone or just destroy them so everyone’s really nice to him and he doesn’t know why everyone’s so nice and he’s a horrible little brat, and whatever he wishes comes true, so he takes away people’s you know, like if he says no you haven’t got a head anymore you head’s just gone. So everyone’s kind of tiptoeing round him aren’t they.to try and please him and in the end he makes this guy a jack in the box as he loses his patience. There’s only five people left in this little village, five or six people, and he’s controlling them as they’re really terrified of him. That’s a really good one, I really liked that one, that was cool. Because then it just ends.”

Describe your latest album or EP

Sue “It’s all the hits, it’s like Guided By Voices, one hit after another.”

Becks “It’s got quite a funky cover.”

Bob “Translucent orange, that’s a good vinyl colour. I like it.”

Bob “It’s definitely got to be on vinyl.”

If you could replace any band member with anyone, living or dead, who would it be and why?

Suse “None The band could not have anyone else in it.”

Sue “We’ve got people that we take influences from for different reasons.”

Danii “It becomes an ego trip.”

Bob “Yeah, and you don’t concentrate on the band, you don’t give one hundred percent to the band and the bands going to get that splitting off your fucking emotions or whatever. Or your talent or whatever, your drive, your ambition over three things just hoping one, it’s like throwing darts and hoping you hit one of three things. So that was a rule we laid down, that if you’re in the Furs, you’re in the Furs, you’re not in another fucking band.”

What would be your dream super group line-up?

Becks “Travis Barker as the drummer.”

Danii “David Simms from The Jesus Lizards as the bassist.”

Suse “It’s got to be Joe Strummer.”

Kay “Anyone from Kings Of Leon.”

It’s often the case though that you get a band that shouldn’t work, and then you have The Stranglers

You look at the musical influences of each member and they’re completely different. Not one of them has the same influences as another band member

Danii “Faith No More, they’re another one really. Their influences are all over the map and they all play completely different styles, but somehow it works for a bit. For a bit.”

Do you have a practical joker?

What’s the best practical joke you’ve played on someone else on tour?

Bob “We’ve never been on tour so I can’t say. We just tend to take the piss out of each other a lot, all the time.”

Kay “We had a bit of a bump at one of the gigs on the drive down there, and I messaged to say that Suse’s exhaust pipe was dragging on the floor when it wasn’t.”

Sue “So I panicked. Yeah so that was not very fun. So then I ended up chasing Kay round in circles for about an hour.”

Kay “I don’t know if there’s anything else. Not off the top of my head anyway.”

Bob “We all just seem to be taking the piss out of each other and having a laugh most of the time.”

Danii “It’s all the band is basically based on, just constant piss take.”

The Apocalypse Playlist. What’s the first song you put on your playlist for the end of the world?

Bob “Does it have to be based on Armageddon? No? It can just be any song?”

Bob “Play REM, that seems to be very appropriate. Or Man at C&A by The Specials, that’s very apocalyptic.”

Sue “It would probably be Dirty Old Town by The Pogues or something like that. Something from The Pogues.”

Bob “You might want to take your mind off it, maybe some Burt Bacharach or some easy listening kind of thing.”

Danii “Probably something that would stop me from stressing out. I’d probably have something like Sheville by The Melvins. Just nice and chill, just something to help me avoid having a huge panic attack in the almost inevitable event of the apocalypse. It’s going to happen, so.”

Bob “Chase The Devil by Max Romeo. That’s a good one.” 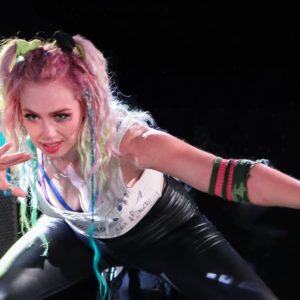 Sumo Cyco/As Sirens Fall/Suburban The Underworld – 28/11/2019 Suburban brings a touch of Aussie quirkiness to the Underworld...
Copyright 2017 Devolution Magazine. All Right Reserved.
Back to top