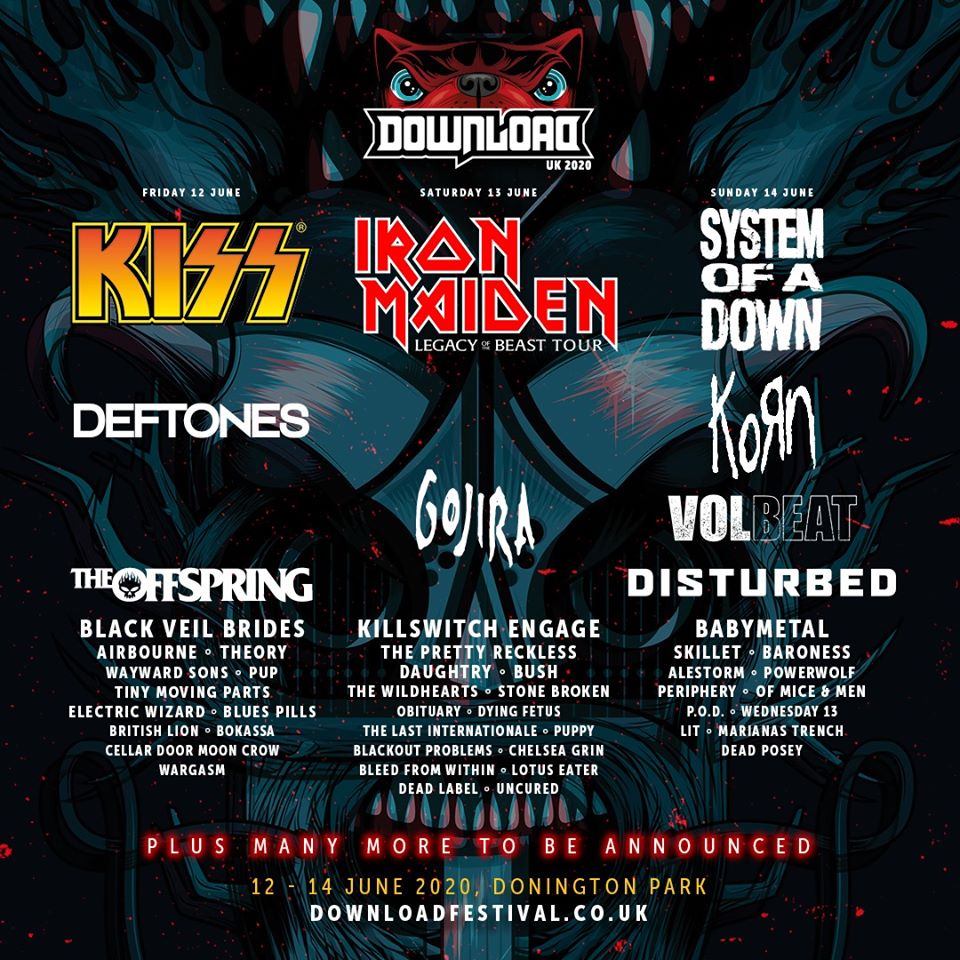 KISS, IRON MAIDEN & SYSTEM OF A DOWN TO HEADLINE
TICKETS ON SALE NOW

Download Festival has announced more bands to join headliners IRON MAIDEN (Legacy of the Beast Tour), KISS and SYSTEM OF A DOWN next year. The world’s premier rock event takes place 12 – 14 June 2020 at the spiritual home of rock in Donington Park, Leicestershire. Tickets are on sale now at downloadfestival.co.uk/tickets.

Headed to Download are Denmark’s VOLBEAT with their hybrid of rock ‘n’ roll, riffs and rockabilly, making for an explosive and certainly unpredictable live show. Their seventh studio album Rewind, Replay, Rebound dropped in August 2019 and landed at #7 in the UK album charts.
Volbeat said;
“We are very excited to return to Donington Park once again to rock with all of our friends in the UK alongside so many great bands. See you in June!”

Defining the Metalcore genre with anthems such as ‘My Curse’ and ‘The End of Heartache’, KILLSWITCH ENGAGE have had three consecutive Top 10 debuts on the Billboard Top 200, landed several Grammy nominations, and have had half a billion streams.

Jesse Leach from Killswitch Engage said;
“We are honoured and excited to play the mighty Download festival once again! We are ready to kick out our new songs and play the old anthems as well! Download crowds are always incredible and we are eager to bring the mother f*****g ruckus!”

Leaders in Japanese kawaii metal, BABYMETAL will land at Donington following the success of their latest album Metal Galaxy. Formed in 2010, the band fuse metal with J-Pop and are a global name in heavy music, renowned for their flawless and unique performances.

SU-METAL said:
“The crowd at Download Festival always welcomes us with a lot of energy so I can’t wait to perform there again! We hope to bring even more power and energy so please look forward to our performance!”

MOAMETAL said:
“To have the opportunity of performing at one of our favorite places is incredibly exciting for us. Can’t wait to see everyone there!”

THE PRETTY RECKLESS are a bruising blend of ferocious rock’n roll and blues, with huge singles such as ‘You Make Me Wanna Die’ and ‘Heaven Knows’ in their discography, and their explosive shows have earned them legions of new fans all over the world. AIRBOURNE’s first album Runnin’ Wild was one of the most talked-about and best-reviewed debuts in recent rock history, and their classic rock inspired hits are expected to create a thunder at Download.

Named one of the best-selling rock bands of the 21st Century SKILLET will bring their stadium sized anthems backed by multi-platinum selling albums to Donington next year. BARONESS have embodied a DIY ethic since the beginning. With five innovative and highly creative albums under their collective belts that swerve genre barriers, they consistently keep fans on their toes and are expected to do the same at Download next year.

LIT are considered one of the preeminent bands to have come out of the post-grunge era of the late 90’s, defining an entire generation of power punk with hits like ‘My Own Worst Enemy’ and ‘Miserable’. Since their warmly-welcomed return in 2011, British alt rock titans BUSH have shown no signs of rest as they have since released two albums and appeared on the John Wick: Chapter 3 soundtrack with a heavier new sound inspired by System Of A Down.

The Duke of Spook WEDNESDAY 13 has been added to the line up following the release of eighth album Necrophaze. Expect the unexpected from the original horror punk enigma who is infamous for theatrics. Also performing are BRITISH LION, the side project of Iron Maiden’s Steve Harris that’s stamped with his unique style.

With a cult-like and fanatical fanbase as well as being referred to as “the heaviest band in the universe”, ELECTRIC WIZARD will perform at Donington with their uncompromising style of ‘70s inspired doom and detuned guitars. They’ll be joined by PERIPHERY who are at the forefront of the djent movement with their blisteringly technical and heavy prog.

Since their inception in 1984, OBITUARY are a fundamental act in the development in death metal and have made one hell of a dent with ten colossal albums and ear shattering riffs under their name.  Joining them, are death metallers DYING FETUS who will be heading back to Donington in 2020.

Toronto punks PUP have cemented themselves as one of the most energetic and exciting live bands in recent years, and with their noisy, biting and a recklessly fun ode to nihilism, they’re not to be missed. The self-dubbed ‘family band’ TINY MOVING PARTS formed in high school and have worked tirelessly to create the band’s trademark blend of math rock, punk pop, and emo – they have been added to the already monster line up,

Most known for ‘Youth of the Nation’, ‘Southtown’, ‘Boom’, and the triple platinum record Satellite, San Diego’s P.O.D. join the line up with their infectious hybrid of punk, heavy metal, reggae, rap and Latin music.

Making their debut last year with bold album Ain’t Always Easy on Spinefarm Records, STONE BROKEN’s energetic live shows have fuelled their desire to take on the world and are ready to take on Download.

Returning to Download are the retro-inspired blues of quartet BLUES PILLS and their vintage style.  Fronted by hard rock veteran Toby Jepson (G.U.N., Little Angels), WAYWARD SONS dropped their second album The Truth Ain’t What It Used To Be last month and are a much welcome addition to the line up.

Self-proclaimed Kings of Stonerpunk, BOKASSA make their Download Festival debut from Norway following a summer opening for Metallica on their European Wordwired tour. With a sound as bold as their name WARGASM may only have two singles under their belt, but the captivating duo are sure to make their Download debut one to remember.

Download Festival is the home of rock music and takes place on the sacred grounds of Donington Park, which have been associated with rock since the eighties. The festival attracts icons of rock and metal to its main stage, plus some of the best and hottest new acts in the world. 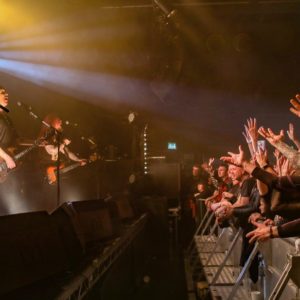 New Model Army/Yur Mum Cambridge Junction – 15/11/2019 It’s a testimony to both the strength of song writing and their...
Copyright 2017 Devolution Magazine. All Right Reserved.
Back to top