One of the new breed of hard edged but melodic acts taking the UK by storm at the moment The Muffin Heads like many have served a long but rewarding apprenticeship. From lessons learned and finding their own sound has come a trio who are rightly getting the breaks they richly deserve. Gary Trueman spoke to Pete, Rebecca and Nick about those early days, playing Rebellion Festival and who they’d most like to share a stage with. 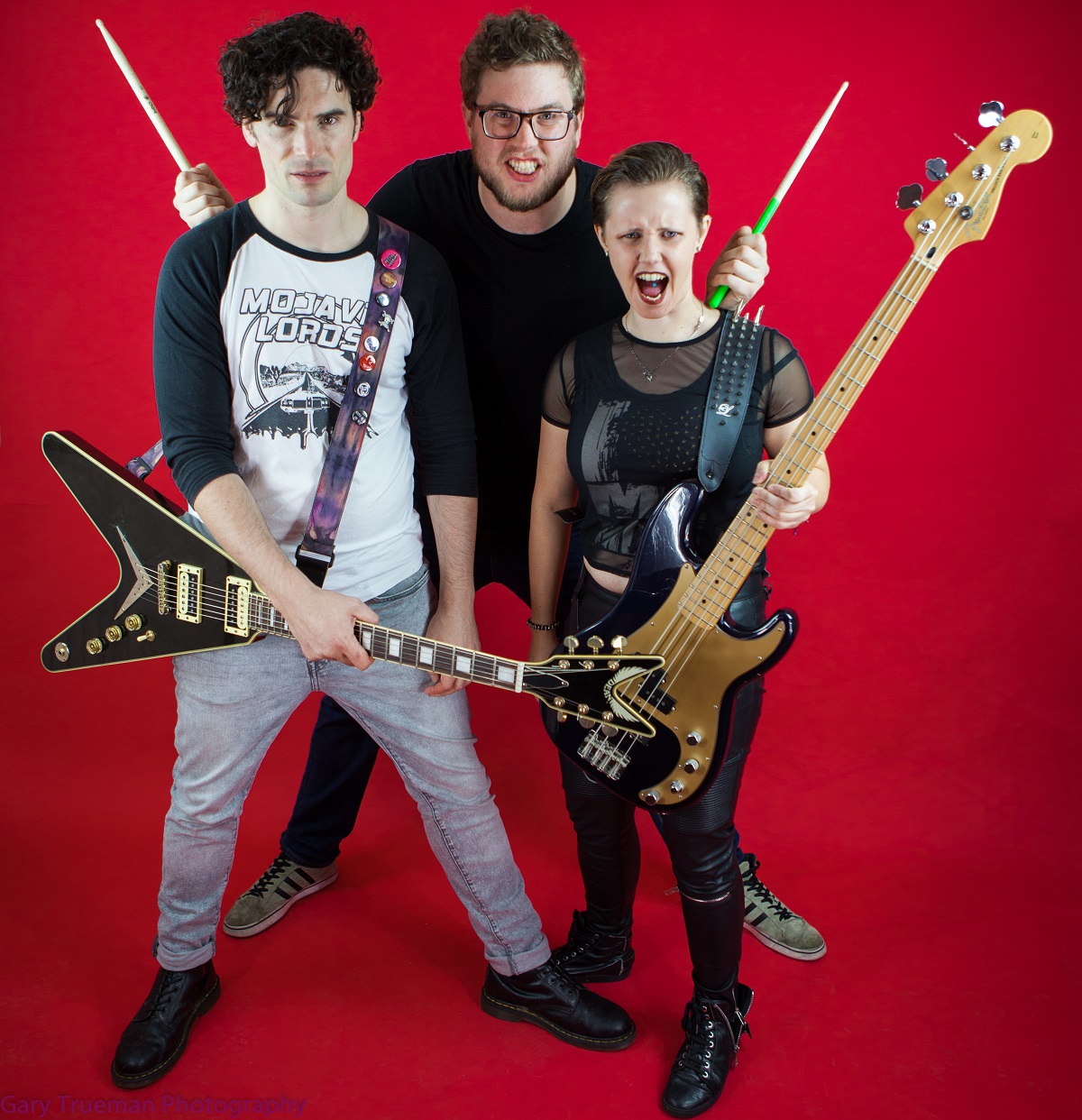 How did you get together as a band?

Rebecca: “Nick and I met each other at nursery school. So we’ve known each other for a really long time. Pete and I met at the gym about ten years ago. Music wise we were in a pub in Harlow and we started chatting about various gigs we’d been to. We talked about how we thought the support bands hadn’t been all that…. and thought maybe we could be not all that…. as well so we decided to give it a go.”

You got started, and started playing gigs. What have you released to date?

Rebecca: “The first thing we released was a charity single for the victims of the Paris attack which was quite a while ago now.  Shortly after we released Queen Bitch. Then after that it was an EP which was at the start of last year.”

Pete: “It’s called Don’t Give The People What They Want. We are looking to release more.”

So are you currently in a kind of writing process for the next release? Do you have some songs already written?

Pete: “Kind of in between. We’re in the writing process but we do also have some songs recorded. It’s just a case of getting them out there. We’re not far off that now really.”

So next time round are you going to go for another EP or a full album? What determines which it is?

Rebecca: “Well albums are expensive. So cost is the big thing. It’s the biggest barrier, that and time.”

Pete: “With the Don’t Give The People EP, that kind of lent itself to being an EP. It was a really good snapshot of where we were and those songs just fit together. LP wise, that’s something we’d love to do.”

How would you say your music has progressed and changed? Where were you when you started out and where are you now?

Nick: “I think slightly more evil and a little bit darker. I think we’re more comfortable as to what The Muffin Heads is and what we should sound like. We’re a lot stricter on each other. We might play something in the studio and think that it’s cool but it’s not us. We’re very deliberate in what we do now.”

Pete: “I think it’s got dirtier as well. Darker, dirtier and even more evil.” 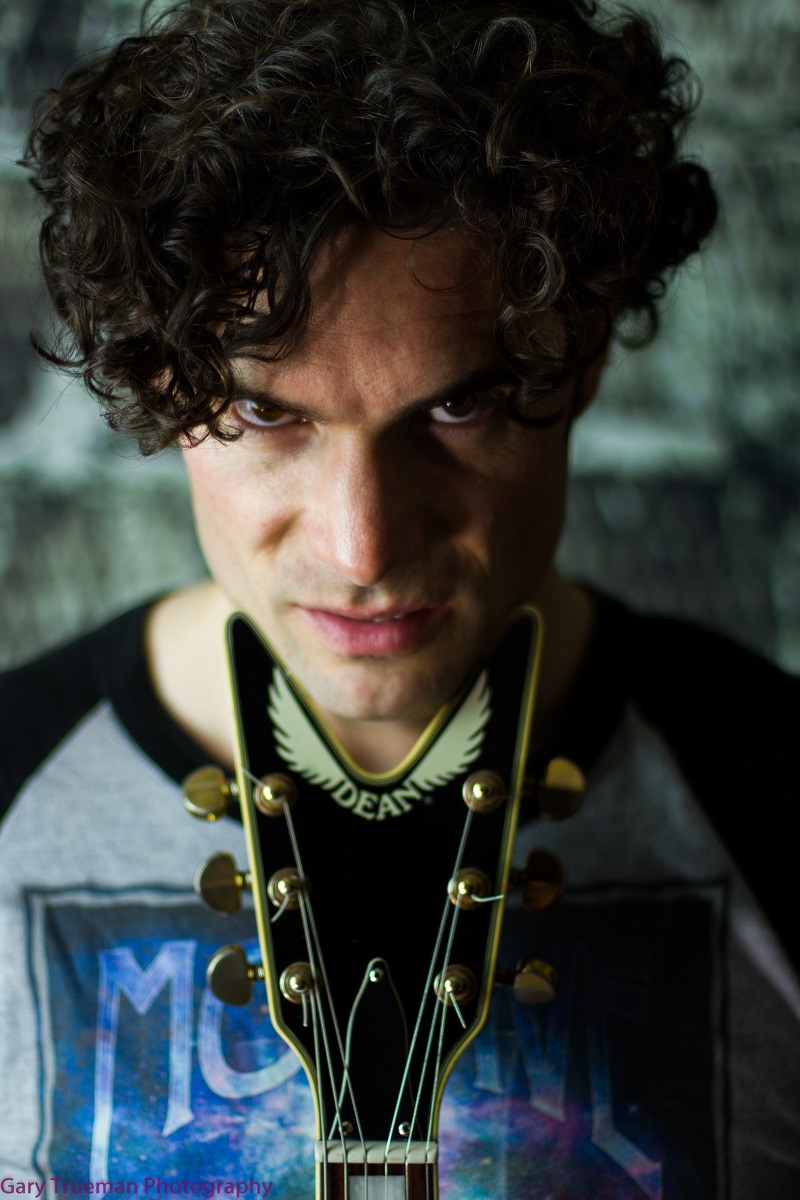 There’s one thing a lot of people notice when they see you for the first time and we have to talk about it as a specific thing and that’s Rebecca’s vocals. You do seem to have a naturally low register which someone at Rebellion Festival said was like listening to a female Lemmy. What’s you reaction to that Rebecca and is that your natural pitch?

Rebecca: “It’s a hundred per cent where I’m most comfortable. My voice is pretty low but I think there are plenty of female vocalists that are lower but probably not in the same genre. When you go more towards death metal or metalcore that’s where you get your proper growly screamy female vocals. I’ve been listening to quite a bit of that recently actually. Pete’s made the joke about being compared to Lemmy quite a few times.”

Pete: “I bumped into Andy Copping once and said he had to book The Muffin Heads on the basis that Rebecca is a female Lemmy. We played a gig recently and got approached by two guys after the show. They wanted to know what we were using on the vocals, what effect, was it a vocoder? I’m like no that’s our lungs. They were most surprised that Becs has that kind of pitch.”

Do you think that with a more aggressive vocal sometimes people mistake that for pitch and that people think you’re a little bit lower than where you actually are?

Rebecca: “Maybe, it wouldn’t surprise me. Maybe because it is a bit aggressive people might think it’s a bit lower than it really is. I do sing quite low because I feel I can get a bit more power through that. I’m not an established vocalist, I’ve only been singing for as long as the band has been going and I’’ve never had a lesson or anything like that. So I’m learning all the time. Every time I step out onto the stage or go to watch gigs I’m always learning. I try to push myself when we write new songs, to try new things. Sometimes that can result in a little bit of a loss of voice but I think I’m getting there.” 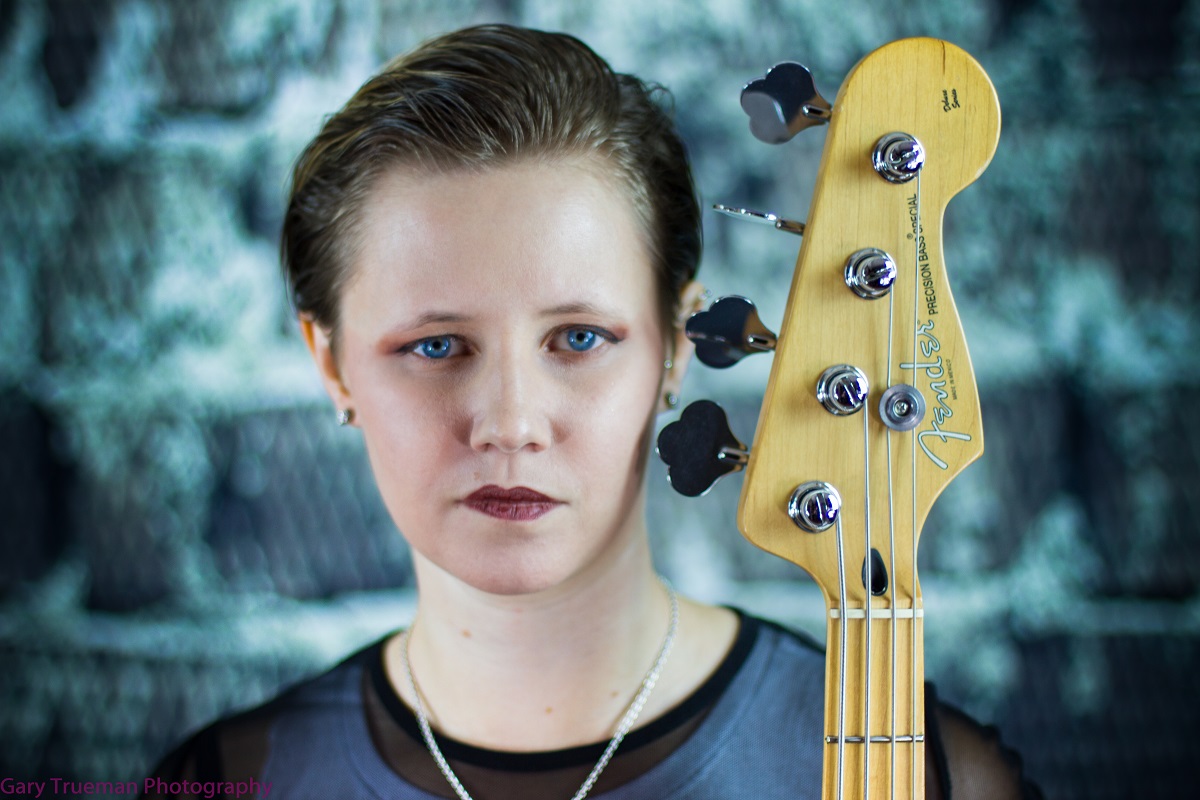 Rebecca: “My voice is pretty low” on those Lemmy comparisons.

You recently played on the Introducing Stage at Rebellion Festival. What was that like as an experience and how did it compare to playing a regular gig?

Nick: “I t was epic. Just the buzz back stage. When you’re loading in and walking around the place you’ve got this full festival with loads of different people all there to see music. They’re all hungry to listen to stuff.”

Rebecca: “I totally agree. It was our first time going there in general so to see it through brand new eyes was brilliant. We walked through the back stage area and into the Casbah stage and we were like wow! It’s massive.”

Pete: “I don’t think there was any preparing for how big it was. We’ve been, like many do, knocking on the door for a few years so to go and play that was insane. We’re so elated to haver played it.”

Rebecca: “I was shitting myself before we played haha.”

So while you were there who did you go and check out?

Pete: “Completely by chance we saw a band called Shock who blew both me and Becs away. They were fantastic. Obviously some of our friends that we saw smashed it. Pollypikpocketz and Tokyo Taboo, and we saw Pizzatramp who were hilarious. They were one of my highlights of the weekend. The Svetlanas who we know and love. They were insane.”

Rebecca: “We saw The Dwarves, The Exploited, Dream Nails, Hands Off Gretel and The Menstrual Cramps. Pretty Addicted and Turbulent Hearts.”

Pete: “We just tried to see as much as possible. We think it’s important for bands to not just play and disappear. It’s important to go and support other artists.”

Do you think some people are a bit surprised by the wide range of music at Rebellion given that it’s billed as a punk festival?

Rebecca: “That’s the beauty of it really. What is punk is is an interesting question. Take Vish and her project Pretty Addicted. You couldn’t get anything… not weirder…. but weirder. She’ll appreciate that I think. It was like Marilyn Manson crossed with The Prodigy crossed with… Vish. Then you had pure punk attitude from Turbulent Hearts. Suzi was mental. My uncle who came to Rebellion is still talking about her.”

Pete: “Then you’ve got Geoffrey Oicot, they were so entertaining. One of the most punk rock things I’ve seen all weekend was there singer in his cricket whites hitting a tennis ball and it shattered a light which came crashing down. That was insane. It was the perfect shot.”

Nick: “Punk is about the message, it transcends what the music sounds like.”

If you had the opportunity to pick any band or artist dead or living to play with on stage who would it be and why?

Rebecca: “I’m going to give you two answers. For our type of music Peaches because she blows my mind. I think she is absolutely brilliant. She’s not just a performer she’s an artist. I admire everything she does. But my favourite man of all time is David Bowie so I would love to have played with or even just been in the same room as him.”

Nick: “Mine would be Nirvana. For the pure energy and the amazing musicianship of Kurt. To witness that and to share a stage with something so energetic and powerful would be incredible.”

Pete: “I would love to play on a stage with Iggy Pop. That would be my dream. I’ve seen him a few times and there’s no one else like him on stage, but that said there’s no one like Peaches on stage. If I could only choose one it would be Iggy Pop.” 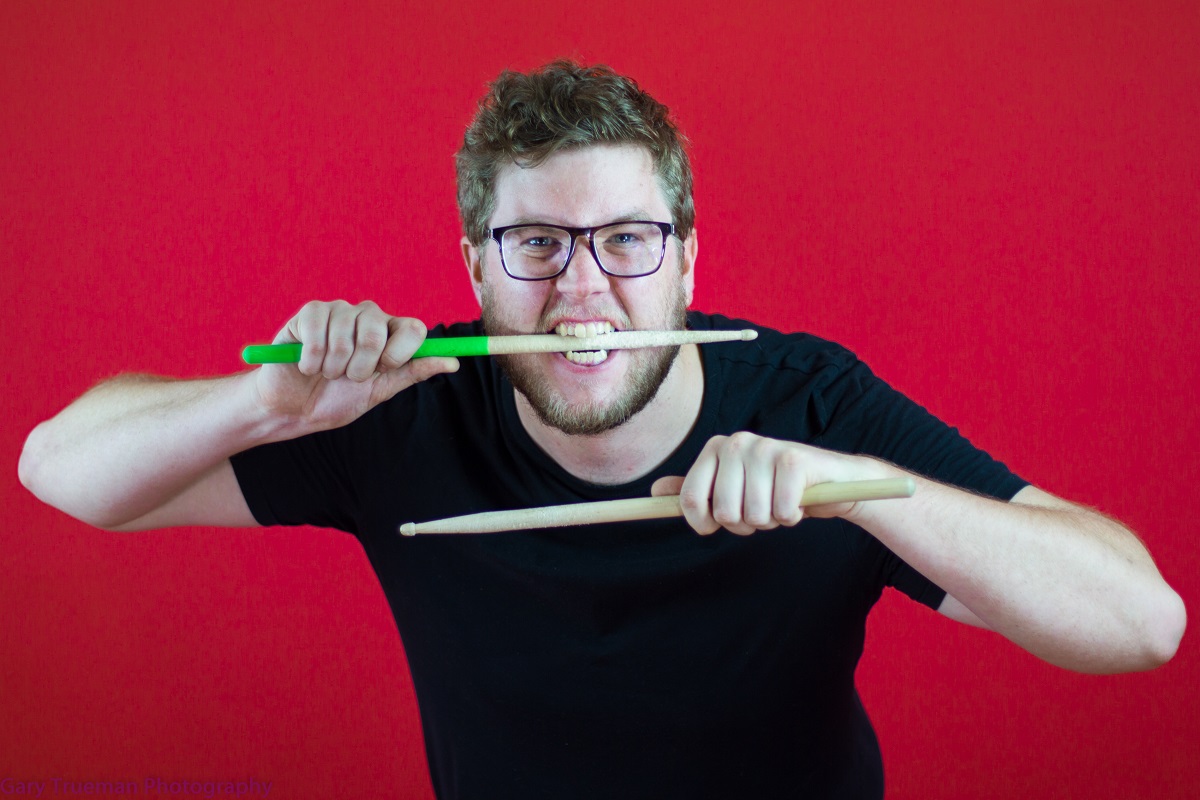 Nick: “Punk is about the message, it transcends what the music sounds like.”

Interview: Shane Pain "Being Felicia in public has shown me an entirely new world." 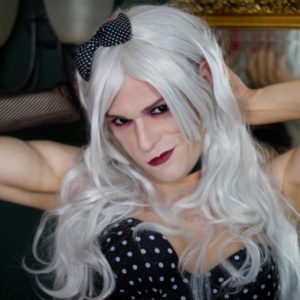 Interview: Shane Pain "Being Felicia in public has shown me an entirely new world."

There’s something deeply impressive in seeing an artist truly express themselves on stage. To be able to explore your own inner...
Copyright 2017 Devolution Magazine. All Right Reserved.
Back to top