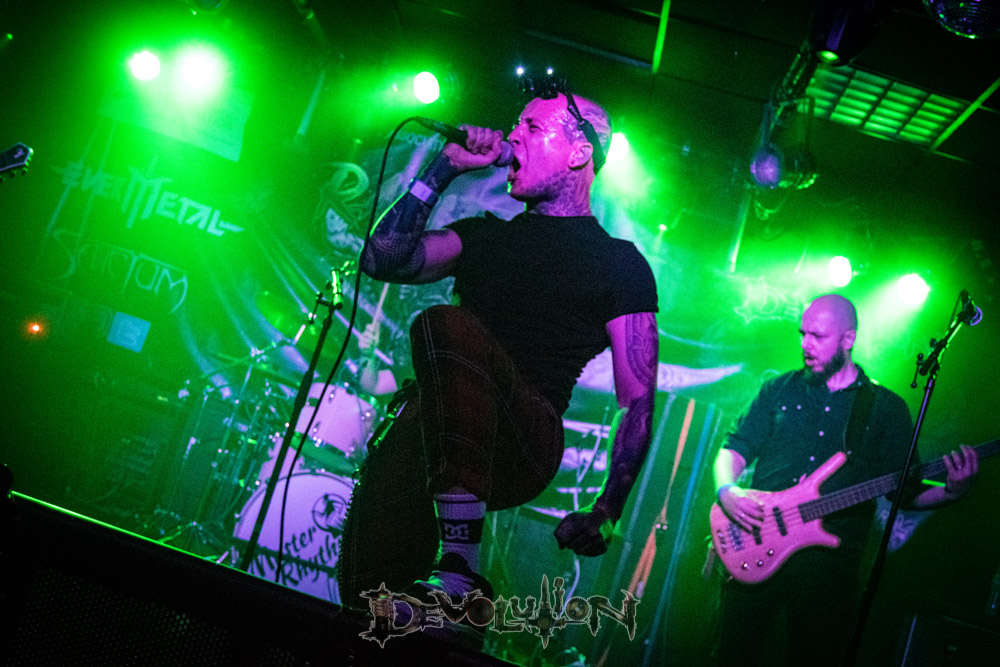 With only one stage to play with there’s an impressive 27 bands playing over the weekend. It would have been 28 but at the last minute My Diablo pull out. Transportation issues don’t help matters as the road directly outside the venue is closed, including access to the nearest car park. Despite this there’s still a sizeable turnout by the evening on all nights. Being a band down helps matters on the Saturday as the starting band is allowed to take to the stage a few minutes later than scheduled in order to fill the gap left, but given the number of bands change overs are kept to a very tight schedule, some bands ready to get on with it with a few minutes to spare. With few exceptions the weekend is a brutal onslaught of noise, with the emphasis on the more extreme side of metal, but that doesn’t stop anyone from making the most of what the weekend has to offer. Along with the usual top 5 there’re plenty of highlights over the weekend. 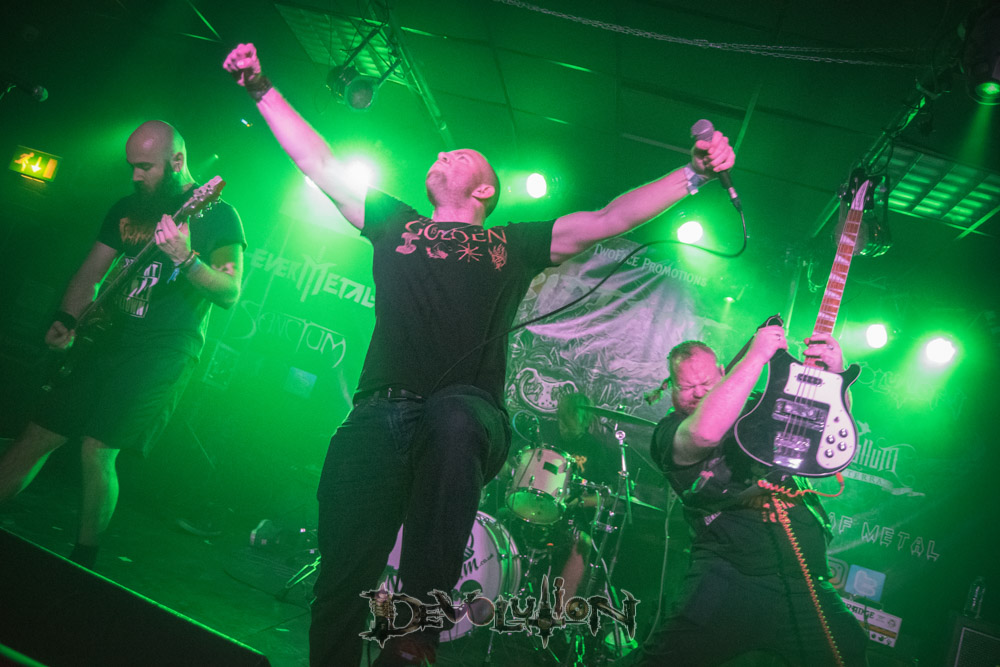 Friday night almost seems the wrong way round, but The Crushing bring the humour to the night, while NWOBHM band Troyen seem out of place amongst the younger bands and may have suited a support slot instead. But it’s a free night in The Wheatsheaf so plenty of mosh pit action to be had. On the Saturday A/M get The Bullingdon started a few minutes later than advertised. Despite the relatively early start the bands and audience still give it their all. By the time the day reaches the halfway point there’s a good-sized crowd ready for the evening, with even the organiser Mark Gibbs getting in on the act with his band Violence Is Golden All that’s left is for Doom metallers Conan to finish the night before the afterparty gets into swing. Sunday is understandably quiet to start, with King Bolette kicking the last day off before Final Clause of Tacitus bring their rap metal to the stage, finishing up their set with House of Pain’s Jump. It’s a solid line-up for the day, with every band playing well, but stand out performances go to The Five Hundred who are clearly still on a high after playing Download, and the utterly weird Papa Shango, who seem to spend more time off-stage in the crowd than on the stage. But the humour works well against the backdrop of extreme metal. 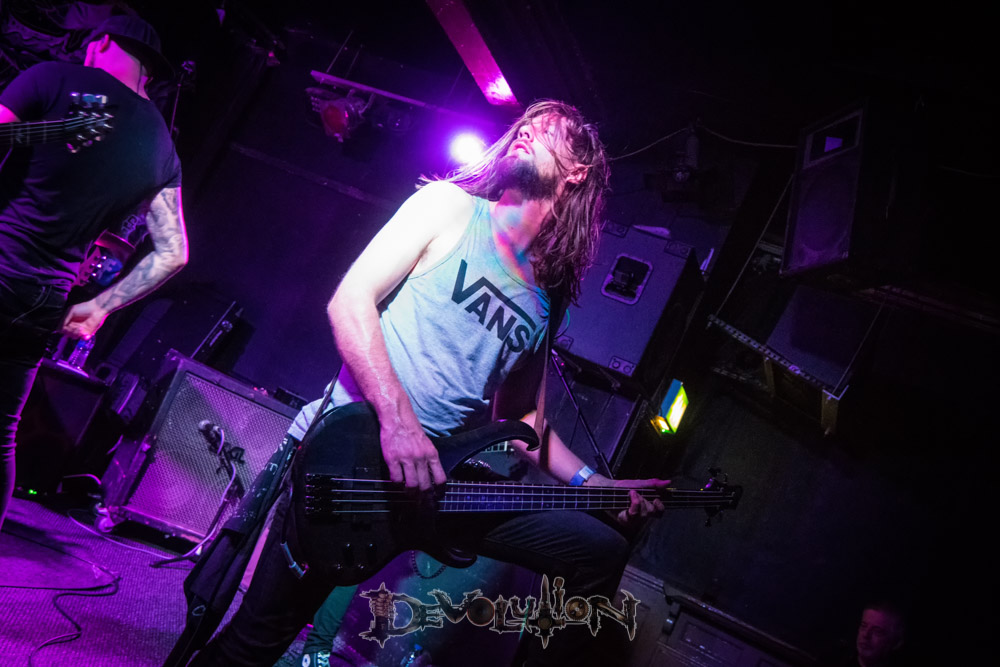 It could easily have been The Crushing taking the honours on the Friday night, for their great sense of humour alone, but Fahran just pips them to it with a set that could have seen them as worthy headliners. Matt Black’s vocals give them an edge on the night. They’re the clear audience favourite with the crowd’s energy peaking for the night. 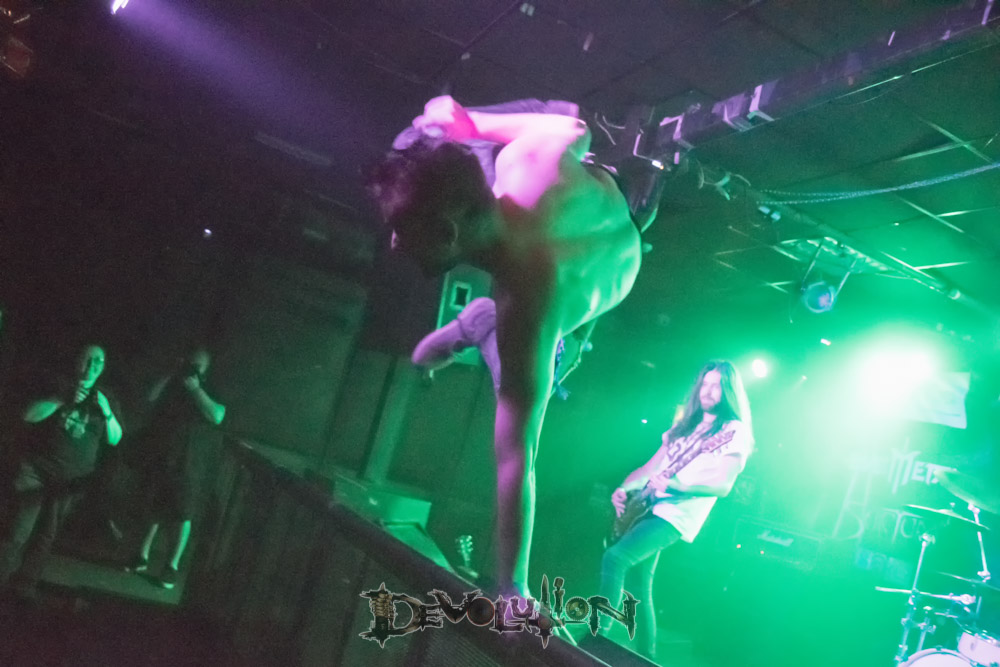 A few minutes before the band starts there’s a hushed “I’m not sure what’s going to happen, we’re not as heavy as everyone else” from singer Cole, who wonders if anyone will come and see Hell’s Gazelles play. He needn’t worry, as they fill the room. At times you get the feeling that someone needs to nail his feet to the stage as he dashes off to another part of the crowd, jumping on the bar, and causing general mayhem in a way that only Hell’s Gazelles can. The Energizer Bunny has nothing on Cole Bryant when it comes to sheer exuberance on stage and as always he gives 110%. On a day of Doom and Thrash metal their more classic metal sound still goes down well as they prove why they’re one of the hottest underground bands in Oxfordshire still. 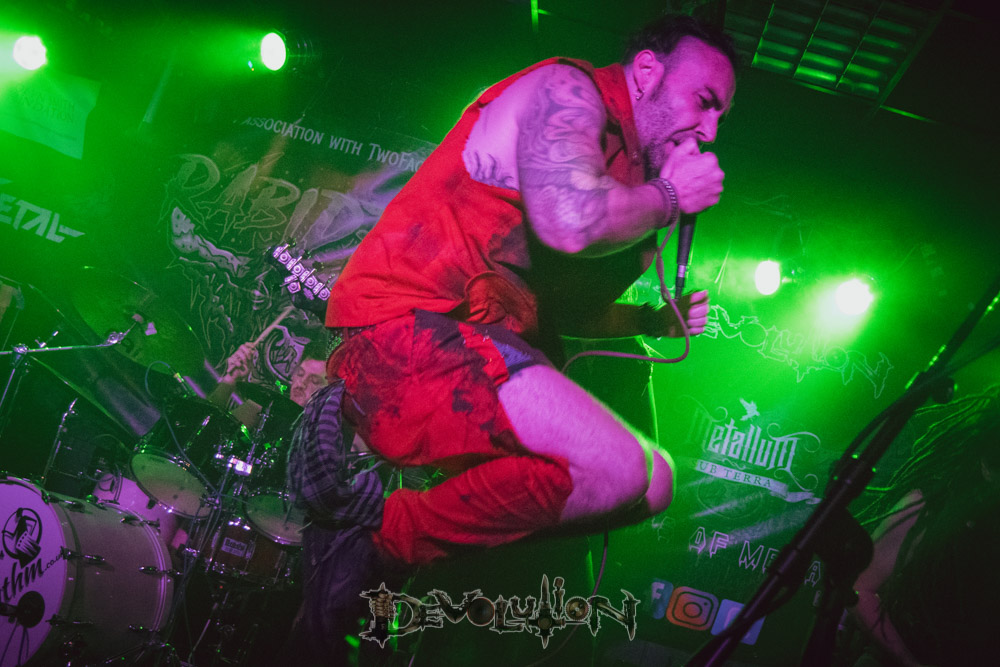 It’s rare for a band to burst onto a scene, especially when they’re competing against the thousands of bands out there, but Red Method isn’t just another death metal band. Made up of members of Meta-Stasis and The Defiled there was already a buzz before they played their first gig, and rightfully deserved as well. Still less than a year old the band has got a following that bands with decades behind them can only envy. It’s the energy they produce on stage that sets them apart, with vocalist Jeremy Gomez jumping about the stage as if he has springs attached. Keyboardist Alex Avdis throws his keyboard and stand around as if it’s made of paper, prompting some questions over whether it’s actually plugged in. No need to worry though, it’s definitely plugged in and most definitely being played, he just is that mental on stage. 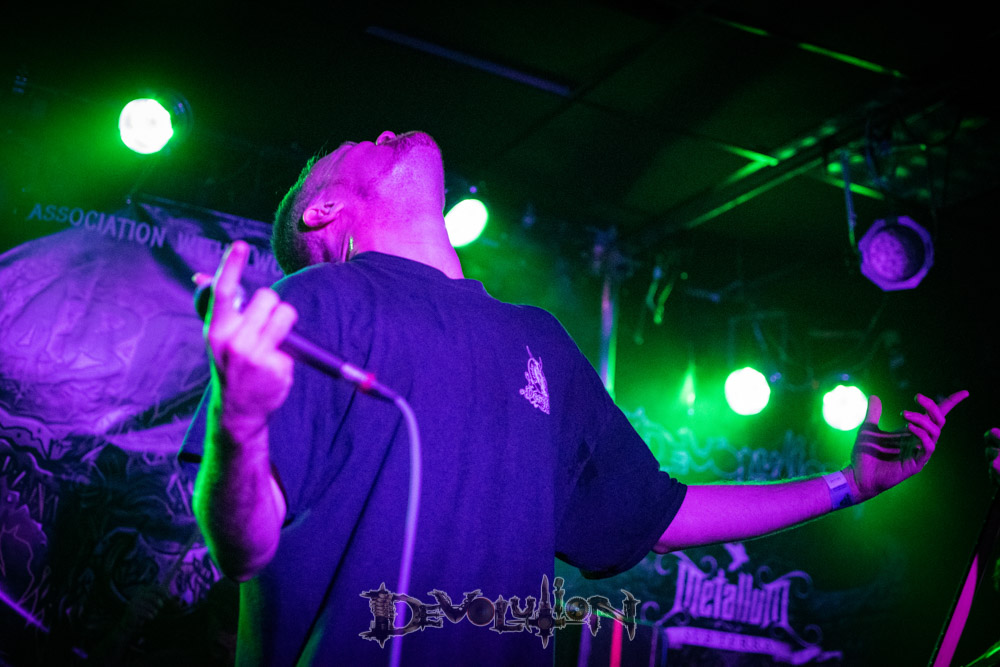 Oxfordshire’s finest Stoner/Doom band Desert Storm prove why they’re still one of the best at what they do. While there are a few technical bands playing over the weekend Desert Storm up the ante and play a perfect set. While some bands over the weekend struggle to draw the crowd to the barrier, that’s not a problem here, with the audience more than happy to move forward. Arms are raised, fists are pumped, and the crowd bangs their heads in unison. If headbanging ever becomes an Olympic Sport then expect Desert Storm to bring home the medals. 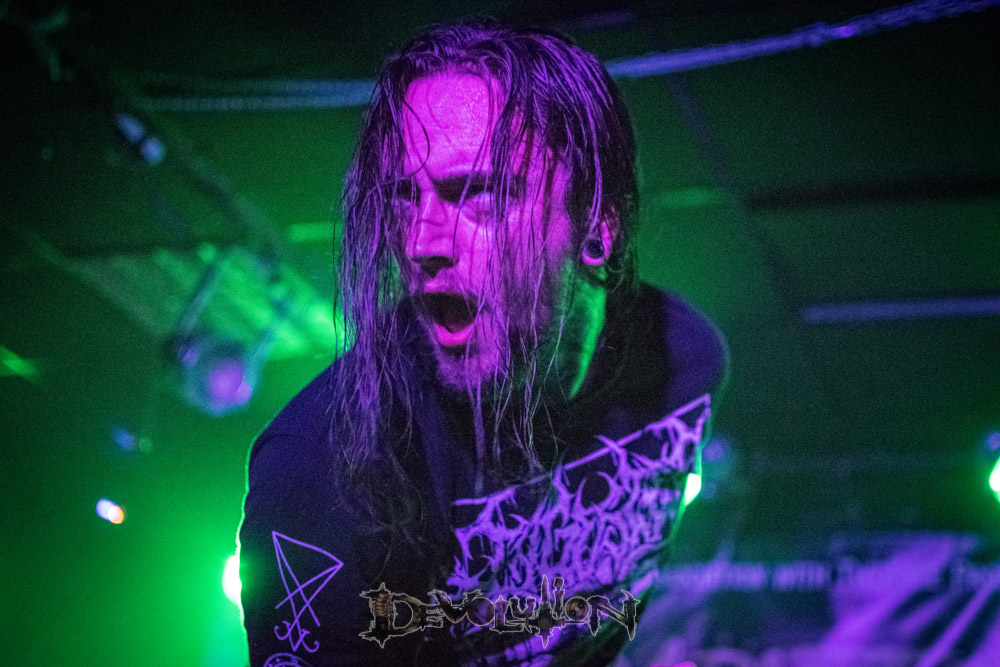 Ingested turn up with an entire department store’s worth of merch, it seems they didn’t read the memo regarding the venue’s capacity. They do however manage to keep the majority of people in the venue till the end, closing on the Sunday being no mean feat. The weekend has had a lot of bands attempting the cajole the crowd with “open the fucking pit up” but Ingested not only manage to get circle pits and mosh pits going, they even get a conga line. They also prove that they can still bring a show despite a technical issue taking out their laptop with the backing tracks, resorting to just their main instruments for the rest of the night. 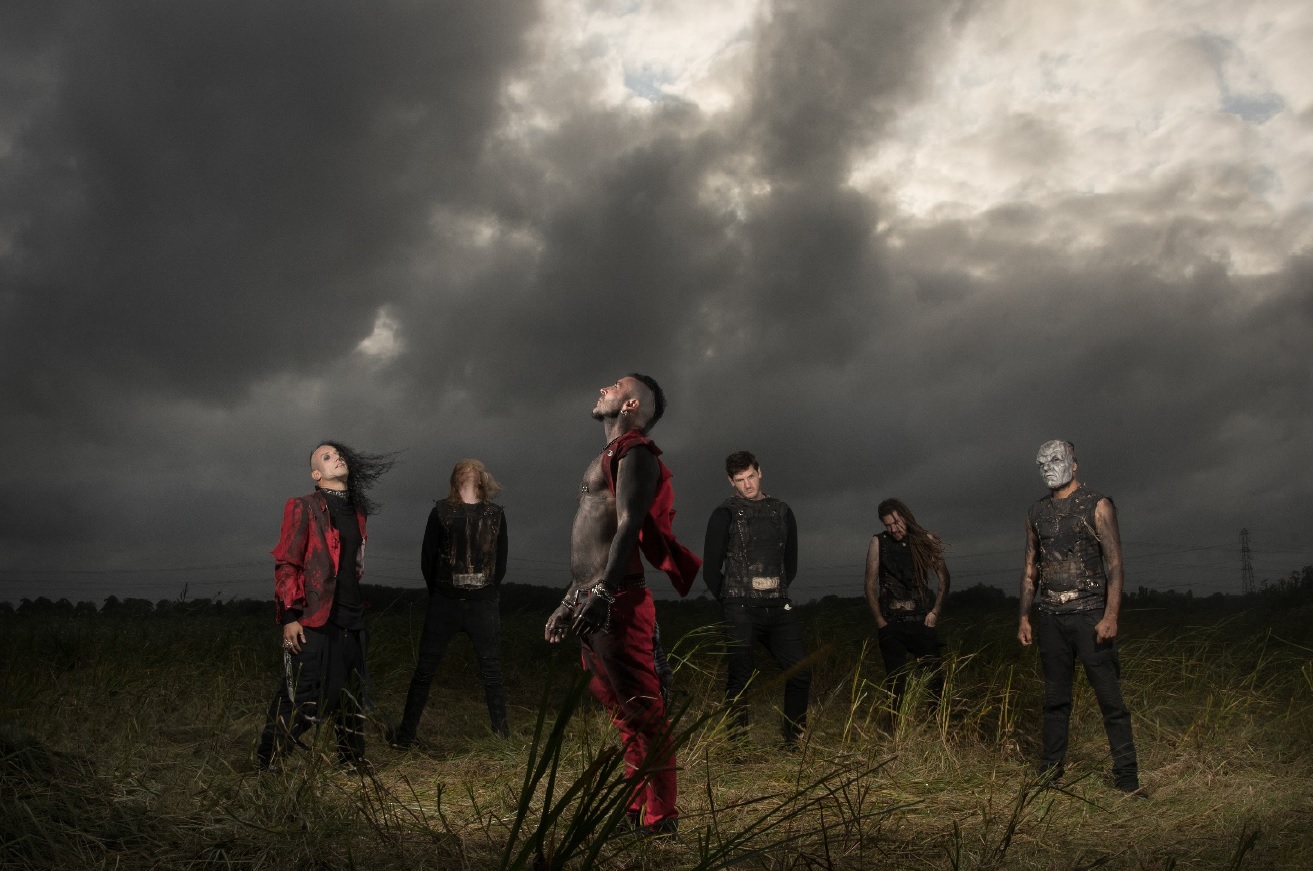 News: Red Method Close Out Their Debut Album Cycle “For The Sick” On November 20th (‘International Survivors Of Suicide Loss’ Day) With An Intensely Powerful Finale… 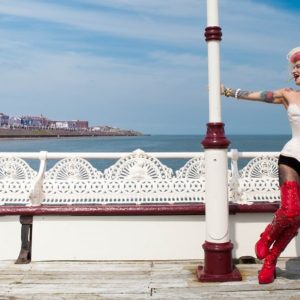 La Katrina plays bass guitar for the excellent Migrana Social and has quite a few more strings to her bow too. She’s a tattoo...
Copyright 2017 Devolution Magazine. All Right Reserved.
Back to top