With founding members of punk now qualifying for bus passes there’s a need for some of the more mature bands to start filling in the widening gaps. While there are a lot of fantastic acts coming through punk still needs bands with experience too.  In Evil Hour stand out not only for their musical ability but also as next generation icons that younger artists can look up to.  Gary Trueman chatted to singer Alice Hour about  band longevity and encouraging the next generation. 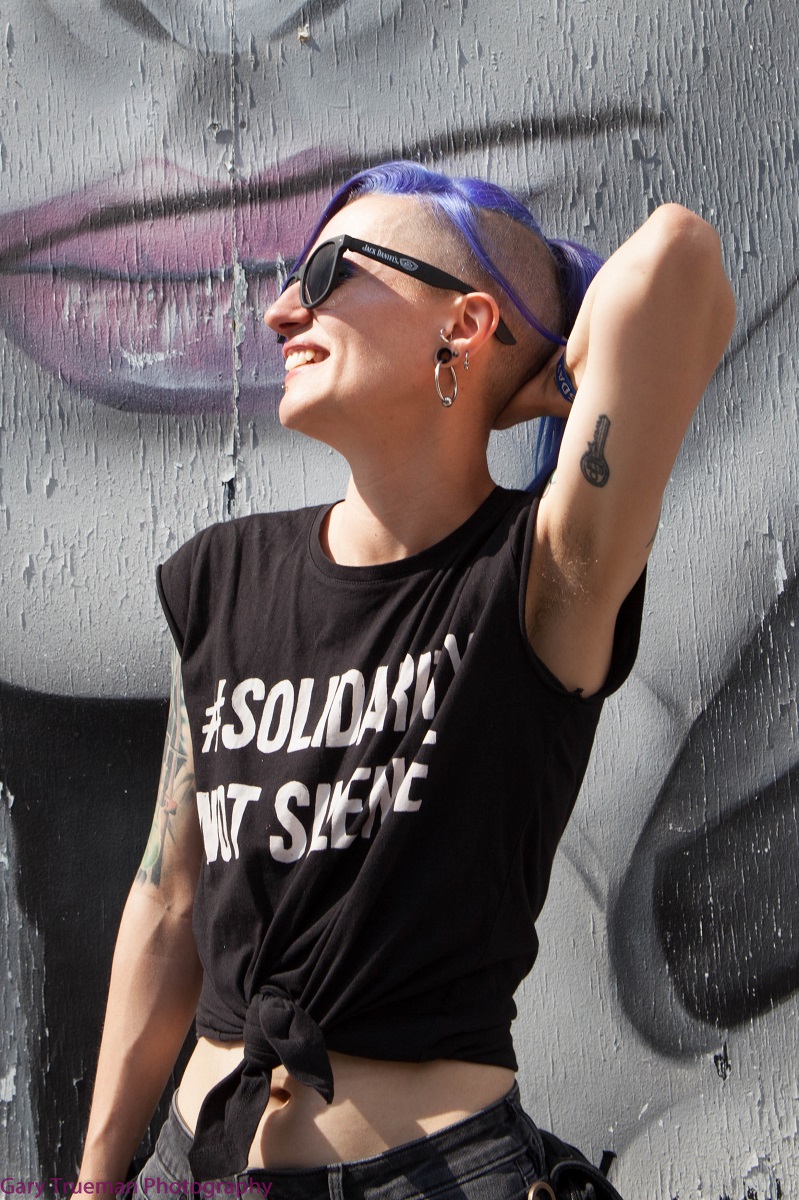 How long have In Evil Hour been going?

“It’s been quite a while, originally we got together 15 years ago.  Me the bassist and the guitarist all met at college while doing our A levels and we just started out then. Like a garage band, or more accurately a dining room band as we used to practice in our guitarists parents house.  I started off doing vocals through a tiny little 15 watt practice amp sat on a chair. I think that’s where my voice comes from because I had to learn top shout over everybody. In about 2007 we became In Evil Hour and gave it a bit more of a go. We’ve gone through a few drummers since then but now we have a really settled line up. I think we’ve done Rebellion eight times.”

It’s quite common that bands get together at college or university but not many last that long. What’s the secret of sticking together and staying the distance?

“I don’t know really. We’ve been friends for years and we all get on. We have had quite a few drummers, just people who didn’t want to do it any more or were more interested in other things. We just tried our best to get better and we didn’t quit.  That was it. Even when we weren’t getting that many gigs we kept going at it. So the secret is to get on with each other and don’t quit.”

Playing together for so long as a unit and now with a settled line up drummer wise means the music has become very tight. Does that also give you a good platform to perform the lead role as well?

“It makes it easier.  We practice a lot as well, once a week whether we need to or not. The songs are like muscle memory as well.  You can relax because you know what’s coming and what everyone is going to do and that means you can focus on your performance. That’s always been a big thing for me, I’ve always wanted to be in the kind of band that I would want to watch. I can’t stand it when bands come out and just stare at their shoes like they don’t want to be there. I really want to be there and I want that to come across when I’m playing. I’d like to think that the women in the crowd will think that they can do that too.”

Regarding women in the crowd do you think people are starting to wake up to the fact that things needed to change, and have been changing?

“Things are definitely changing but it’s not a music scene issue or a punk scene issue it’s a society wide issue. The way women are viewed and the way women are treated and what women are felt to be capable of. Within the scenes the punk scene is much more open and accepting of women. Festivals like Rebellion you’re going to get and always have had probably more bands with women in than at any other festival.  There are things that still need to change but I personally have always felt welcome.” 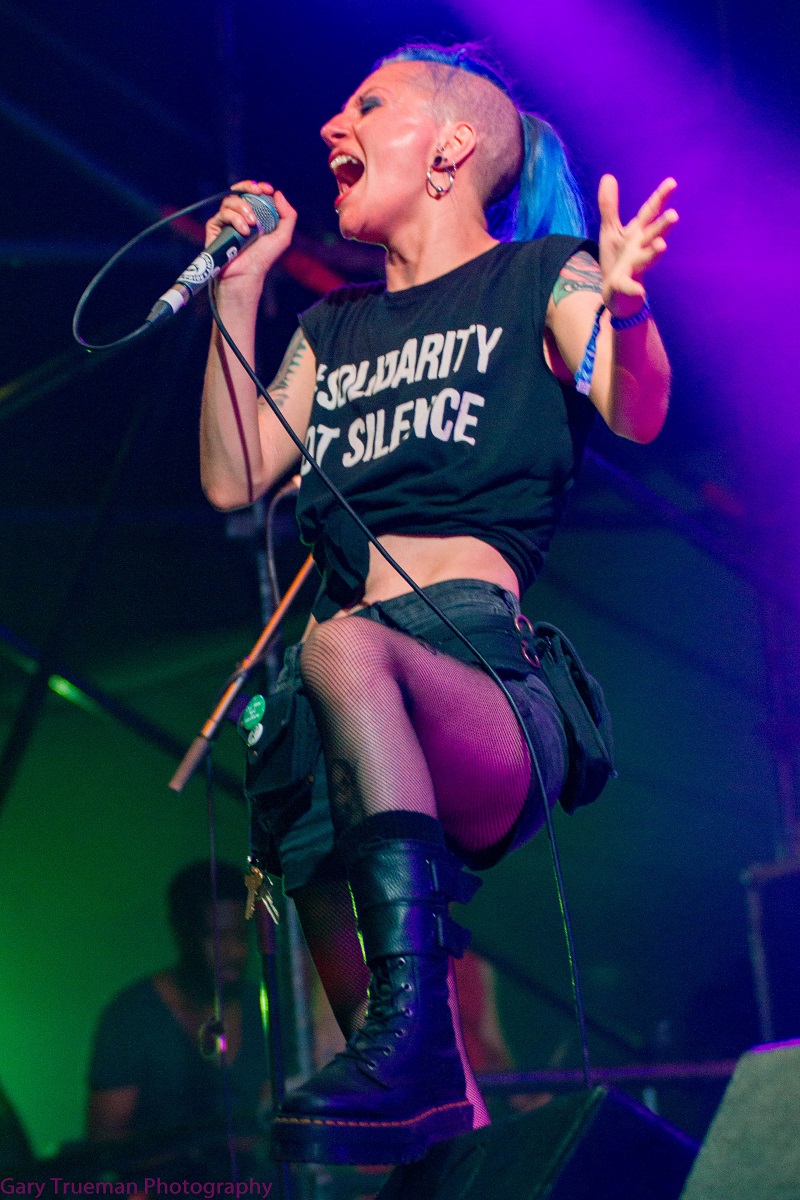 There’s a wide range of ages at Rebellion and at punk gigs generally, and all ages seem to follow all bands, old or new, and of any style.  Why do you think that is?

“There are people who have grown up on the punk scene who are now bringing their kids along to shows. It’s a wonderful thing to see.  We need those young people coming to shows for the scene to survive.  And people starting bands too, there’s a lot of younger bands coming on to the scene as well.”

Do you think there’s a case for allowing much younger people into gigs with adult accompaniment?  Generally gigs are 14 plus or even older as a rule these days apart from ones at the really big venues.

“Definitely. A lot of the shows we play are 14 plus but I went to shows when I wasn’t allowed to. When I was younger, so as long as younger people feel safe and are supported then fair enough. If they go to shows they might get inspired and start a band.”

Who were you listening too that got you into punk? And who are the bands you’re seeing now that you think could break big?

“When I met all of the guys at college I was a bit of a goth and I was listening to Marilyn Manson and Nine Inch Nails, which I still love now. The people I met at college got me into punk and it was bands like Bad Religion and NOFX. I don’t know what it is about Bad Religion but even now I get quite emotional to see them. They are one of my favourite bands of all time. As for bands coming up through the scene now we recently played with a band called Burning Flag and they are amazing. The singer has got such a voice on her.”

So you’re a regular at Rebellion but are there any other festivals you’d love to pay that you haven’t yet?

“Oh the European ones.  We’ve had designs on a few but haven’t got on them yet. Stuff like Punk Rock Holiday.  Europe would be amazing.” 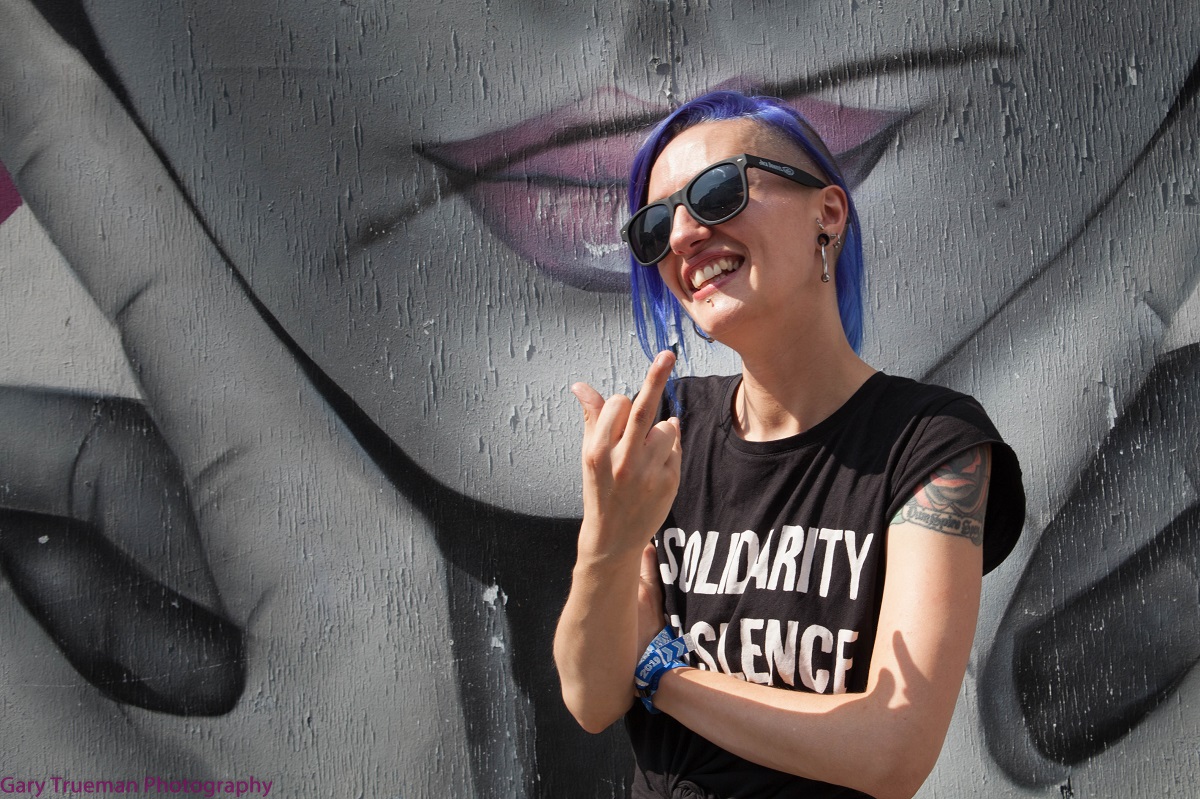 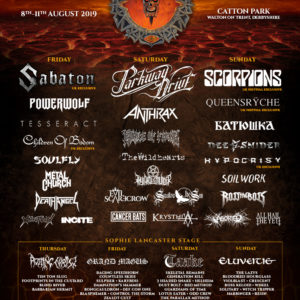 News: Bloodstock Band Change BLOODSTOCK is disappointed to announce that DIMMU BORGIR are forced to cancel their appearance...
Copyright 2017 Devolution Magazine. All Right Reserved.
Back to top