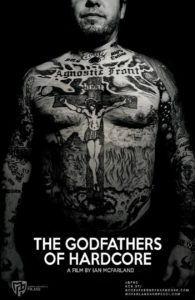 The Godfathers Of Hardcore – McFarland And Pecci Films

With a title that in no way exaggerates their importance to the music scene this rockumentary style film gives an insight into Agnostic Front in a very human way.  The clips of all the on stage insanity are interspersed with observations on the band, and on every day life in the world of Roger Miret and Vinnie Stigma.  You can feel their passion for the music they make both through the bruising live clips and also the more sober and reflective off stage dialogues.  There are some truly touching revelations here that would connect with anyone, not just fans of hardcore music.  The fact that Vinnie has lived in the same building in New York for all of his 60 years is quite amazing.  The opening up about leaving his daughter Nadia behind to tour shows how much Roger cares about his family.  And then there’s the fact he’s now being monitored by doctors as he continues to perform after having a heart attack.  The bond between Stigma and Miret as close friends is so well shot and edited that you almost feel like you’re intruding at times, almost but not quite.  Of course the music rules, but at the same time for an hour and a half you become very aware that you’re watching two close friends saying what they needed to say before it’s too late and the moment passes.  Crowdfunded to make it happen this is a film that fans of the band will love but anyone can enjoy.  And don’t think Agnostic Front are seeing this as a swansong either, they’ve performed 400 shows since this was filmed.  See you in the pit guys. 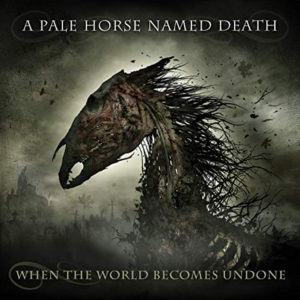 A Pale Horse named Death When The World Becomes Undone - Long Branch Records The universe is imploding and there...
Copyright 2017 Devolution Magazine. All Right Reserved.
Back to top