“As the saying goes ‘Time flies when you’re having fun’…can it really be time to announce the line up for Amplified Version 3.0 already?! We’ve endured torrential storms in 2017 followed by blistering sunshine in 2018 so it would be a brave person to bet on what’s going to happen weather wise here at Amplified over the weekend of 19th-21st July, 2019.

One thing is for certain…we are going to continue to bring you the best new acts from the global rock and metal scene. Yes, artists will yet again be joining us here on the hallowed stages of Amplified from all around the world including artists from Sweden, the Netherlands, and as far afield as Japan. With the masked mayhem in the shape of MUSHROOMHEAD joining us from the USA as Saturday’s Red Stripe Main Stage headliners, Amplified 2019 will be here before we know it. 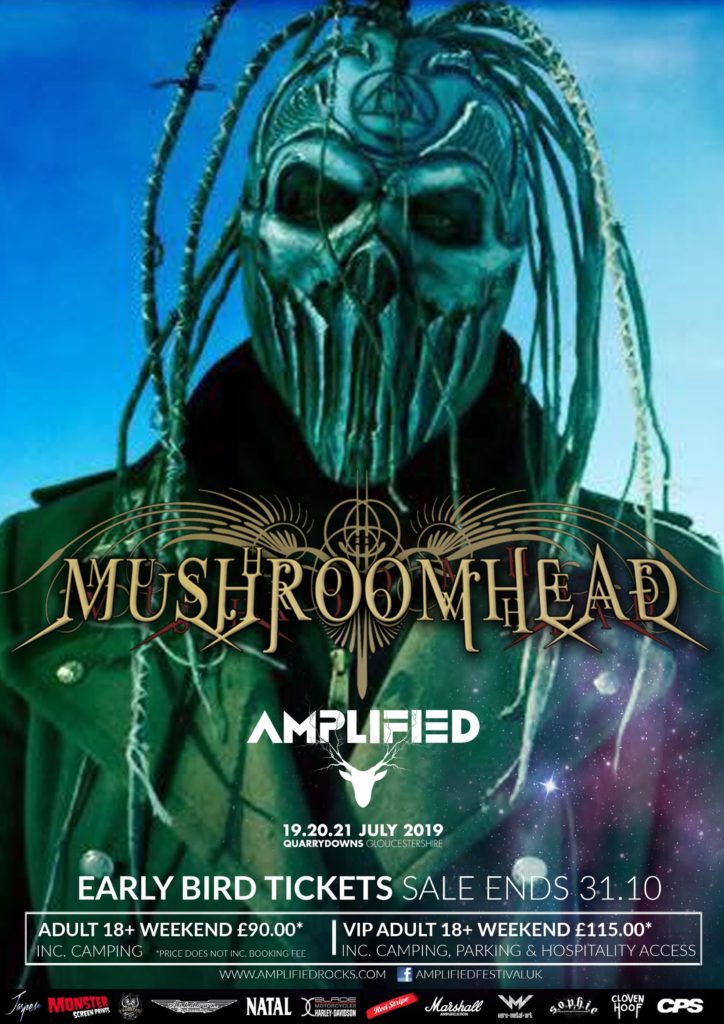 So please read on for the first confirmed acts and stay tuned as we’ve still several other acts to announce over the coming months…it’s going to be a very special weekend here at Amplified 2019!

And as always thank you for your continued support as without you Amplified wouldn’t be the festival it has grown to be and we look forward to welcoming you all again very soon.” Gary – Event Founder and lover of all things rock!

Gloucestershire based AMPLIFIED FESTIVAL makes their first announcement, and it’s a statement of intent as Ohio based Multi-Million selling MUSHROOMHEAD are confirmed to headline the Saturday Main Stage.

Formed in 1993 the band is known for their unique sound. A not-so delicate blend of Heavy Metal and Industrial Rock their theatrical imagery features masks and costumes as well as their unique live shows, which are normally played in more intimate venues. This will be the first UK outdoor festival Headline slot for the Cleveland based band, and it promises to be quite the set. MUSHROOMHEAD are primed and ready for the Cotswolds in 2019. 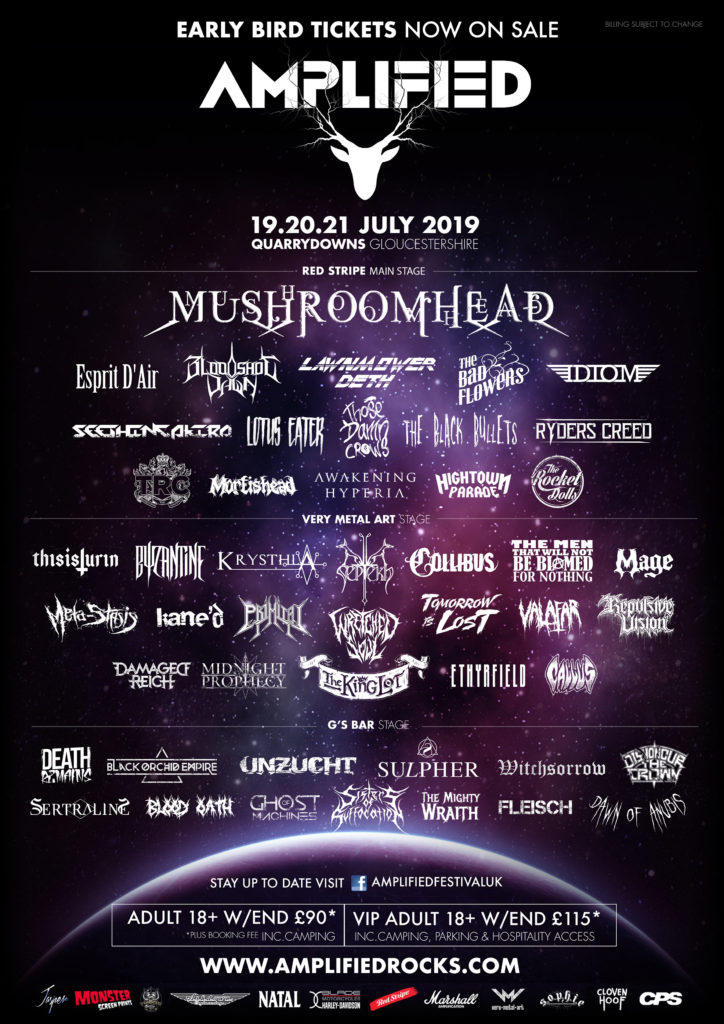 Joining them on the main stage bill are legendary Thrash lunatics LAWNMOWER DETH, who among their many accolades have played twice with Kim Wilde and are the current theme tune for the BBC Radio 2 segment “Dr. Mosh”. Frontman Qualcast Mutilator said “At our age it’s always nice to play somewhere that we can purchase shortbread in a tin with a picture of a thatched cottage on it. Nothing says metal like a tin of shortbread. South West and Amplified, we are coming”.

Announced for the Very Metal Art Stage are bands KRYSTHLA, SEPTEKH, THE MEN WHO WILL NOT BE BLAMED FOR NOTHING, BYZANTINE, THIS IS TURIN, MAGE, COLLIBUS, META-STASIS, WRETCHED SOUL, PRIMITAI, KANE’D, VALAFAR, REPULSIVE VISION, THE KING LOT, TOMORROW IS LOST, MIDNIGHT PROPHECY, CALLUS, DAMAGED REICH and ETHYRFIELD.

In addition, the festival have announced the returning SULPHER and UNZUCHT to play the now legendary “G’s Bar Stage”

Remaining Early Bird Tickets will be on sale until midnight on the 31st October, 2018 via the festival website. For full details visit: www.amplifiedrocks.com/tickets.

Now that we have your attention please stay tuned for further announcements and a few surprises heading your way…these include the final headliners performing here Friday and Sunday on the Red Stripe Main Stage, those acts headlining the Very Metal Art Stage and the final act performing on the legendary G’s Bar Stage on Sunday night…the festival’s ‘coup de grace’ if you will.

You’ll have to keep those horns sharpened and be on the look out for more info coming soon!!! 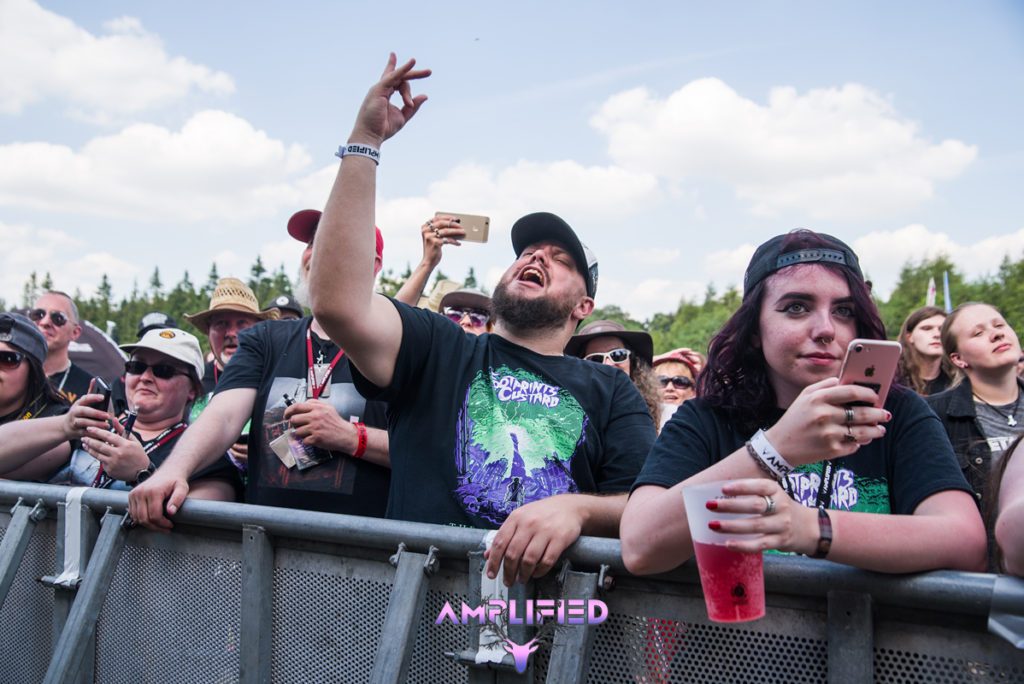 Be sure to check out: www.facebook.com/amplifiedfestivalUK

News: Those Damn Crows Launch UK Tour By Sharing Video Of New Single 'Blink Of An Eye' Performed On Piano