Security was tight at the Wembley arena, no doubt in the wake of the Paris attacks. Long queues and full pat downs for every patron meant that a significant portion of the crowd were still outside when the first support act Amorphis started their set. However, this didn’t stop the lucky faithful who managed to get tickets for this special one off show from getting the antidote to the frustratingly long lines to get in.

Amorphis had a hard job in trying to engage the steady flow of restless people coming into the arena but their energy combined with their infectiously catchy folk metal set the tone for the evening perfectly. Keen to showcase their new Album “Under the Red Cloud” in the biggest UK venue they’ve ever played, it was up to vocalist Tomi Jousten to engage the building crowd and hook them in with his album perfect vocals that boomed through the arena with the raw power and ferocity that snared many a fan on the UK festival scene. Their set worked just as well in the arena environment as it has on many a hazy summer field, with anthemic, restorative tunes immediately commanding attention and raising a sea of excited fists to the air.

Arch Enemy felt like a somewhat misjudged addition to the billing, normally courting a much heavier demographic than your typical Nightwish fan, they at first looked a bit out of place. That said, it was just what was needed to keep the energy of the arena ticking over to the main event. New vocalist Alissa White-Gluz exploded onto the stage keen to make her mark having taken over from her predecessor only a year earlier. She filled those shoes with ease and brought a high octane performance that commanded immediate attention. As the music was a departure from the softer, more melodic offerings of the other two bands it took a while to for the crowd to get fully engage, however, a smattering of anthems such as “No Gods, No Masters” and “Under Black Flags We March” soon had the audience frenzied, the ripples of energy from the hardcore faithful at the front making their way around the arena. A gloriously heavy set by one of the most polished bands on the scene.

It’s a triumph and testament to the band who have been touring constantly for the past 15 years to have finally made it to Wembley. Not only are they the first Finnish band to do so but they also sold out the place with their last night of their European tour. With the announcement that the performance was being filmed for the upcoming DVD, it was clear that the show had to be faultless and they didn’t disappoint.

An impressive burst of furious pyros and vibrant video backdrops transformed the stage, enabling the band to weave the right atmosphere and story into every song. Floor Jansen’s vocals were both enchanting and powerful, showing off her great range by easily commanding the more operatic songs from the Tarja era as well as the newer songs from Anette’s time with the band. In spite of this it never felt she was taking anything away from the other band members who were equally present in showcasing their finest work. The floor was shared by all as they regaled the crowd with much anticipated classics such as “The Poet and The Pendulum” and “Nemo” woven seamlessly into material from the new album “Endless Forms Most Beautiful”. The performance was enthralling and pitch perfect throughout and as the band reached its crescendo with “the Greatest Show on Earth” they brought out Richard Dawkins to a thunderous roar. For such a long set list it felt like no time at all and you got a sense that you’d seen something truly awesome. 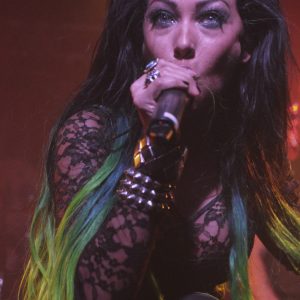