The basement of the Circle Club played host to Anti-Clone’s sold out debut album launch party at the start of May. To describe the venue as small is an understatement, but the claustrophobic underground feel to the brick walled cellar is ideal for an intimate gig. While the main room is packed from front to back the side rooms (consisting of the exit to the smoking area and the bar) leave plenty of room for people to escape should they feel enclosed. Support came from the fantastic metalcore band Savour The Silence, opening the gig with the theme from Fallout 4. Next up were the technical metallers Borders who somehow manage to ramp up the energy even more. But there’s no mistaking why everyone is here when Anti-Clone finally come onstage. Even though the set is quite short for a headline act they still manage to play some early tracks, with ‘Take This Pill’ and ‘The Usurper’ getting an outing, but it’s new tracks ‘Switchblade’ and ‘Feed the Machine’ that really get the crowd going. By the end of the night, and the encore ‘Here Comes The Flood’ has been played, I’ve lost count of the circle pits and walls of death  that have somehow managed to thrive in the tiny cellar. In their home town of Lincoln they’ve shown why they were so well received supporting Mushroomhead and why they’re destined to be the next British Industrial Revolution. 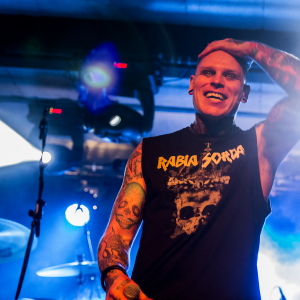 Combichrist, Rabia Sorda & Filter - The Marble Factory, Bristol It is almost the raison d'être of this converted...
Copyright 2017 Devolution Magazine. All Right Reserved.
Back to top