Review: Me and That Man – Songs Of Love and Death Me and That Man

Songs Of Love and Death

I am going to just come right out and say it with a conviction as strong as my love of cheese – this is without a doubt ALBUM OF THE DECADE.

Songs of Love and Death is the enthralling offering from Behemoth’s Nergal and his country sidekick guitarist John Porter. It’s a delicious mix of mini stories that are so apart from anything we have heard from the front man so far in his career and it truly works.  A country and blues almost gothic rock tinged affair you will be transported into a different mindset for an hour. Reminiscent of Cohen, Cash and Cave this macabre record will gravitate towards your darkest places and get your hips swaying and your toes tapping.  It’s a stomping album of undiluted deathbed confessions, the devils crossroads, conflicting life choices, and man’s battle with his own conscious. It’s the dark corners of a smoky nightclub, its ‘safe word only’ sex, its sleazy its unholy and it is self-righteous. It’s a late night cigarette and spoken secrets. It’s the comfort of a bottle of whiskey and the unbridled truths. It’s a battle of the broken mind and forked tongues. It’s the pathway to salvation and the right road to forgiveness. The devil and god are present but within himself and all the answers are contained somewhere within these thirteen songs.  With infectious choruses and accessible chords Nergal and John complement each other utterly and it is songs such as ‘Aint Much Loving’, ‘Voodoo Queen’ and the first song that will no doubt be headhunted for a movie soundtrack somewhere down the line ‘My Church Is Black’  which will have you undeniably hooked. This record is the definition of cool and you need to embrace it entirely – immediately. 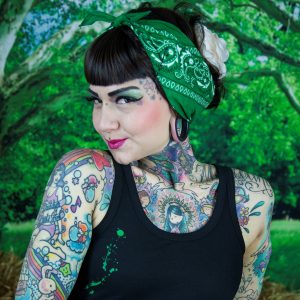 Bringing the passion of her Latin soul to everything she does is Aima Indigo’s trademark.  Whether it’s on stage,...
Copyright 2017 Devolution Magazine. All Right Reserved.
Back to top