An overdue interview with the enigmatic Otep Shamaya who talks Generation Doom, Mad Max: Fury Road album inspiration, the importance of lyrics and the absolute relevance of how Art still saves….

Thirteen years ago I made a phone call across the Atlantic to a woman that I had been an avid fan and supporter of for years to conduct an interview for this very magazine. We spoke for an hour despite only having a twenty minute allotted interview time and that phone call changed my life. Otep Shamaya is an incredible woman, a true artist, a self-believer, an activist, a musician, a voice and an unprecedented inspiration the world over. With the release of ‘Generation Doom’ I just had to have some time with the front woman and talk more about the powerful fiery passion and unadulterated work ethic that was still there burning away at the core of this art and music movement.

‘Generation Doom’ is your seventh studio recorded album and is still just as aggressive, as meaningful as angry as passionate as you have always been – is it a conscious choice or decision to not slow things down a little or are you fuelled by the subject matter of the songs and this is what brings out the rage? Thank you. I’m just living my authentic self without pandering to genres or other people’s ideas of what I should say, how I should say it or what I should stand for. I’ m just being me.

What was the concept or lyrical theme for the album? Did you start out with an specific idea or did it evolve into what it became organically? Organically. I made it clear to everyone that the only is rule is that there are no rules. I went back to my private journals and poetry books and used those as the basis for the lyrics that created the album. I didn’t want to try to adapt to a genre. I wrote whatever the muses recited. And I’m very proud of that. The writing process was very liberating. It was difficult at times to allow myself to be so vulnerable and open about my private life and thoughts but that’s where I started when I wrote our first album and it felt so empowering to live in that space.

When the press release was issued for details of ‘Generation Doom’ it stated ‘We are your mistake – we are Generation Doom’ – are you able to expand on the mistake part, who this was referring to and why? I will expand by quoting Chief Seattle, “What we do to the earth, we do to ourselves”. There will always be those who look at us and wonder how we, Generation Doom, were created. All they have to do is look at their own failures, their own successes and know that each of those contributed to the birth of Generation Doom.

Something’s Wrong with Me To Think That Something’s Right With You ….is a very poignant and very powerful line that really stands out in the track ‘In Cold Blood’ Do you have any advice to your fans and our readers if they currently feel this way about the person they may be in a relationship with?

Thank you. I wrote this song after a very difficult break up. My advice to anyone that can relate to the lyrics “somethings wrong with me for thinking somethings right with you”  will hopefully realise their own self-worth, that life is too short to be unhappy.

Making the video for ‘In Cold Blood’ must have been incredibly difficult and bought back so many memories of your for want of a better phrase  ‘broken relationship’ but did you find the experience cathartic and necessary?

Absolutely. I worked with the same artist I’ve worked with since the first album Sevas Tra, his name is PR Brown, we have such an intimate artistic chemistry that I was able to relive the emotions that I went through when I wrote the song, those heavy anchors that slowly suffocate joy from your heart, but as the song progresses it detonates into powerful cathartic storm of self-empowerment. By the end of filming I felt carbonated.

For the ‘Generation Doom’ album cover and promo photos you opted for an almost mad max / apocalyptic / wasteland vibe what was the inspiration behind this and will the theme be carried out visually into your live shows this year?

Mad Max: Fury Road was the inspiration for our album art. That film is not only one of the best action films of all time but it’s plot seems to be an possible reality for us if we don ’t act to stop tyranny, to slow climate change, to keep the voice of the people louder than the oligarchs, to remember our power as individuals.

For years you have flown the flag for ‘Art Saves’ – I can only assume that you still entirely put your trust and faith into this notion? And if you weren’t the type of person that could be so creative – do you ever think about the person Otep might be?

Art truly saves. Art saves me every moment of every day. I have moments of creative block and it’s a truly terrible existence. I do everything I can to pollinate my mind and soul to end those horrible droughts of imagination.

I get anxious to storm the stage. The waiting is the hardest part. Before shows, I slow my mind, I do my vocal preparations and then just before we take the stage, my boys and I stand together in a circle and I recite Shakespeare, “once more unto the breach dear friends, cry havoc! And let slip the dogs of war.”

You are an avid user of social media and often opt for ‘live’ streams on Facebook addressing your fans and friends directly about an issue, project or thought – do you ever feel exposed or vulnerable being this open or are you using the social media links the way you believe they are intended to be used?

I’ve always used social media to connect with our fans. It’s my way of connecting with people who experience the world the way I do. Sometimes people try to exploit the moment but the overwhelming expression of support from most of our fans silences the silly ones.

Your last album was quite a departure musically and this new one sits between that and earlier material. Are you conscious of fan and critical reaction from previous work when writing new songs?

Hydra was a concept album based on a book I wrote called None Shall Sleep. This album, Generation Doom, is a return to my earlier process of writing as I returned to my private journals and poetry books. It’s a very personal album. I’m proud of it.

I’m ashamed to even ask in this day and age but has the perception of female fronted metal singers changed at all over the years within the industry? For you personally have you had to deal with anything like this of late?

It’s definitely gotten a lot better. There’ still many, many obstacles but we’ve progressed quite a bit and I’m proud to have been on the jagged edge of this revolution from the beginning.

Your lyrics have always been strong, meaningful and uncompromising. Do you sometimes feel your words are overlooked by parts of the media? Often promoters lump female fronted bands together regardless of genre. Have you had that happen to you recently?

Thank you. For me, the most important part of what I do are the lyrics. It’s the message that matters. I know I’m the  “Girl who goes grrr” and I’m proud of the hard work I’ve done to keep my vocal ranges and specialties strong and growing – I also do Voice Over Acting in movies and video games (The Hobbit: Battle of the Five Armies / PS4 The Last Of Us) –  but what really motivates me is the written word. The message. The lyrics.

Your music is summarised as Art-Core – can you tell me more about what this truly means and is defined as by yourself?

At our core, we’re a fusion band. We fuse all different styles of music into our song writing. Punk, metal, grunge, hip hop, spoken word, rock, industrial, poetry and politics. I think we’ve been called Rapcore, Nu-Metal, Art-Core – which are all accurate.

Which of the new songs do you think you will enjoy playing live the most?

We are playing 4 new songs from Generation Doom. I love them all but personally there’s something really intense about Equal Rights Equal Lefts. That song is extremely fun to play live.

Do you still have to prepare yourself mentally before performing any live show? Do you ever get nervous?  Any pre-show rituals?

I get anxious to storm the stage. The waiting is the hardest part. Before shows, I slow my mind, I do my vocal preparations and then just before we take the stage, my boys and I stand together in a circle and I recite Shakespeare, “once more unto the breach dear friends, cry havoc! And let slip the dogs of war.”

You have just begun an intense US tour that will take you through until the end of May – with hardly any days off – how have you physically and mentally prepared for this and how do you look after your voice while on the road?

We Are Fury Road! This is how we do it! I’d rather play than have a day off. My guitarist Aristotle and I work out every day (we carry over 500lbs of free weights with us) and it keeps us mentally and physically prepared for our hectic schedule. We live healthy, we play hard and we conquer every night.

Will you be gracing our UK shores at all?

I certainly hope so. I think we’ll have good news for our UK Tribe very soon.

What bands have you played with recently that you really liked?

We have a band with us right now called Doll Skin. They are an extremely talented band. Check them out.

I wouldn’t do either. This reality is hard enough. I’d let animals speak so humans could finally understand that they aren’t ’t ours to torture, kill and eat. I’d end factory farming immediately and use those lands to plant crops. We’d end world hunger in a year if we used the land and water in factory farming for human consumption.  I’d remind humans we are the guardians of this planet and our job is to take care of it and each other.

Do you have a bucket list? What are the top 3 things on it? I

The final say – comment here about anything that is on your mind right now to conclude this interview.

Thanks to all our fans and supporters for taking this journey with us. It means everything. 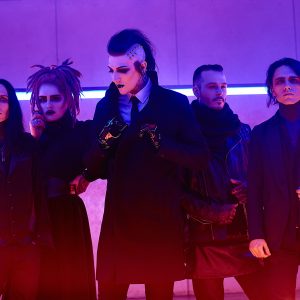 Motionless In White have unveiled a new video for 'LOUD (Fuck It)' taken from their forthcoming album, 'Graveyard Shift',...
Copyright 2017 Devolution Magazine. All Right Reserved.
Back to top