Review: The Treatment – Generation Me The Treatment – Generation Me

As a punter at hard rock hell I came across Cambridge’s own, the treatment by chance and they blew me away live. All the riffs in all the right places and felt as if the set was far too short! after the festival was over I tracked down the album that was out at the time and it didn’t leave the stereo for weeks after that I had avidly followed them until there second album “running with the dogs” which for me was a massive let down so presumed them a write off didn’t figure that if that was the direction they were headed they wasn’t long for this world but again I stumbled upon the new album “generation me” and from the opening riff it tore my head off….. Also finding out they had changed vocalist you really couldn’t tell. It was if they sent off the first two albums off to Buckcherry and had them Mix it up and came out with an album that keeps your interest high and fist pumping throughout there are so many highlights on this record rather than me tell you. Go grab a copy and support this band they are destined for big things they talk the talk and walk the walk! And not many bands can claim that in this day and age! Absolute killer album! 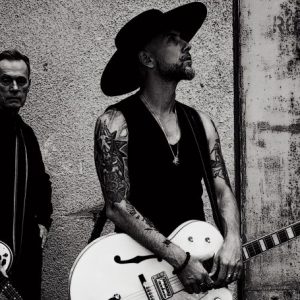 Me And That Man have unveiled 'Cross My Heart And Hope To Die', another track taken from their forthcoming debut album,...
Copyright 2017 Devolution Magazine. All Right Reserved.
Back to top