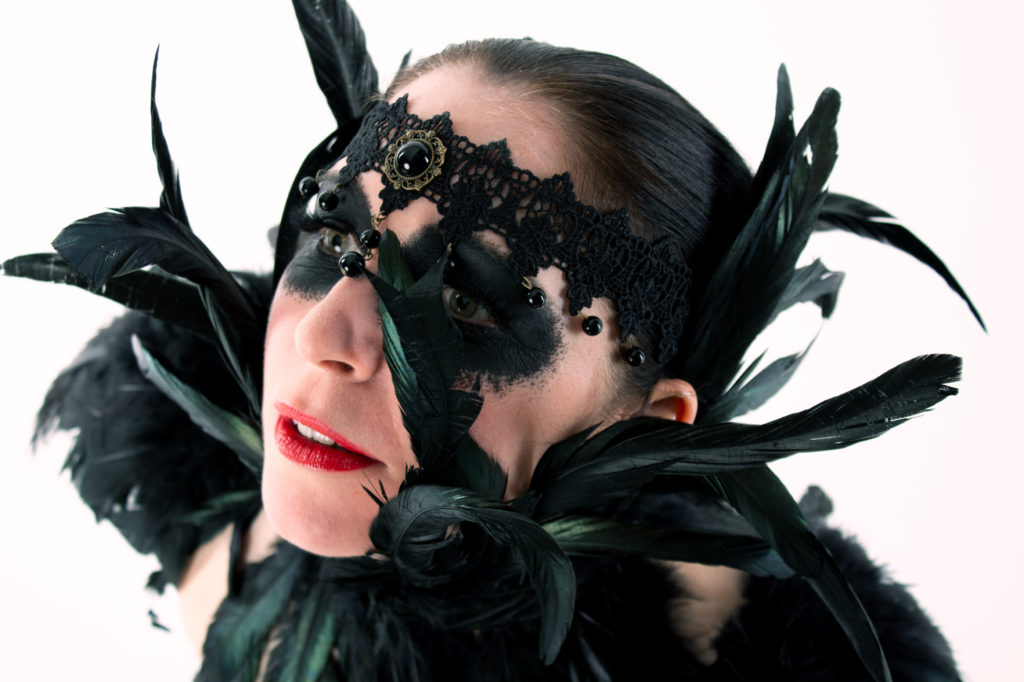 Across the rock, gothic and electronic music scenes there emerges a  condensed and redesigned dance music.  Within this movement comes the unique fusion genre known as Industrial Gothic Dark Trance.  At its forefront are Krow & The Electric Temple. Krow is a self-described, 49 year old, angry, peri-menopausal woman ‘Ripping the world a new arsehole’ because she has nothing better to do with her time. Devolution caught up with her for this introducing feature.

Describe your band members and what each person brings to the table…
“Krow & The Electric Temple are a literal pack of women. The band are the support and the expression of She who has moved beyond the unfocussed, an-archic rebellion of teenage-hood, and into the darker, targeted wrath of a fully-grown woman. Krow is, and is of, Fury: a vengeful server of justice to those who find an outspoken woman above the age of 40 to be inappropriate. Confi-dent in herself, oozing a demonic sexuality and with a voice to tear the wings from angels, she spits, chants, and yet, still melodically, soars her desires, rages and inspirations. Krow is the portrait, and The Temple are her ornately carved frame. Spork and Spanner are the percussionists who hold down the constant driving 140 bpm beat, bringing in effects loops and other aural enhancements to the mix. Nikki’s keyboards fill whatever soundscape gaps are left with underlying, sweeping torrents and top note extravagance flowing from her classically trained fingers. Slit is the bass, the pulsing low end spine of the audio spec-trum. Suna and Kitty provide visual counterpoint and vocal dynamics. As a group they are exploring the possibility of adding another percussive element and heavy guitar – even so, they will not be redefined as a rock unit. EDM is the genre and punk the attitude.”

Tell our readers about your current release.
“The track we have decided to include on the covermount CD of Devolution Issue 46 is called Hallelu-jah. Being pagans and living within a community of amazing sisters we are horrified when we read about the witch-hunts and atrocities that were bestowed upon the ‘wise women’ of the time. The song Hallelujah is our hymn and ‘Ode’ to the witches that died during these witch trials.”

Who would you say you sound most like?
“It’s hard to say who we sound most like… We have been likened to a female Prodigy before. Some people say that I sound like the lead singer of Rockbitch. Bless!”

Who or what are your biggest influences?
“Witchcraft is one of our biggest influences. The sisterhood that we share and the honesty we enjoy. We’ve lived as a community for many years now – some of us going as far back as 33 years. It’s an amazing way to live. Very life affirming and at the same time very raw. We wouldn’t live any other way. Watching each other grow is a real honour.”

If you were marooned on a dessert island which band member would be eaten first and why?
“We’d start off by eating Krow. She has a really big, fat ass and we figure we will be able to keep going, on her ass alone, for at least a few weeks. We reckon we’d be saved by then, go back into the studio and have new direction and new material for the next album with our vocalist still alive!” 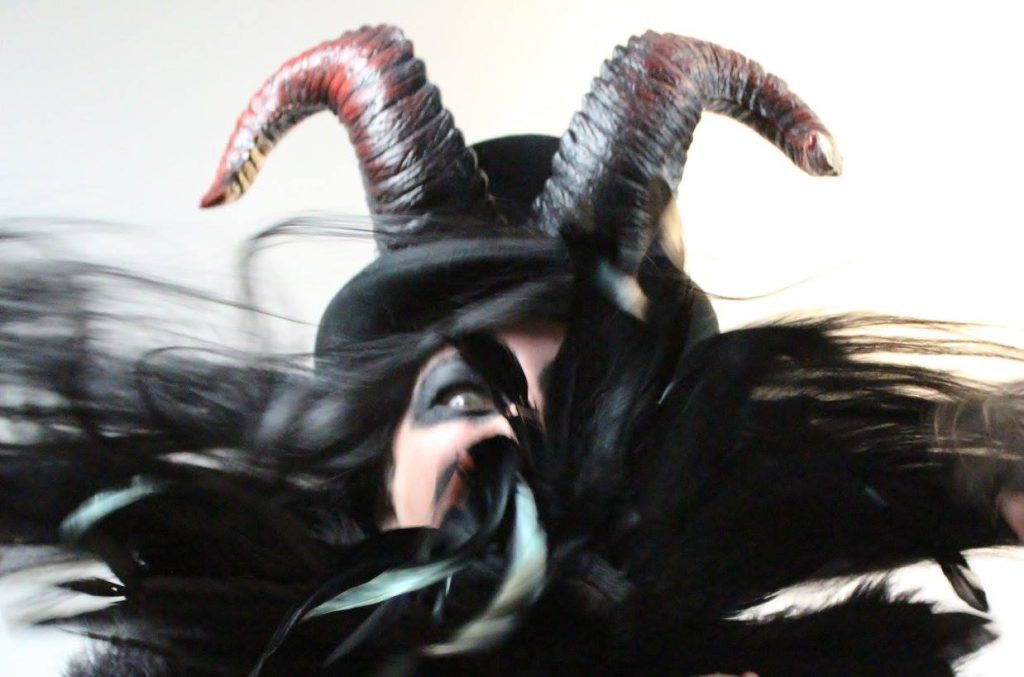 You’re stuck on a night off mid tour with just a games console and a handful of games for company. Do you choose Call Of Duty, Zelda, Need For Speed or do you just raid the mini bar?
“We’re definitely a band that raids the mini bar, plays spin the bottle and end up streaking through the hotel corridors! Spanna has been known to streak down a hallway wearing only a Unicorn hat before. A sight for sore eyes!”

If the band got offered an amazing major label deal but it meant a change of image to something you are uncomfortable with and censorship of lyrics would you take the deal or walk?
“We’d definitely walk. Most of us have been round the block a few times and no longer ‘suffer fools gladly’ so to speak. Krow is too old and seasoned to be told to ‘toe the line’. Money just isn’t that important.”

In the event of the end of the world what’s the first song on your post-apocalypse playlist?
“I carry a calling card with a reminder of how I should live my life written on it. It reads;

Nothing in life remains constant.
Life is not fair.
The goal posts move.
There are no guarantees.
Extract your joy from the moment.
There is only joy.
You are standing on the edge of forever.

With that in mind in the event of the end of the world, I would play ‘Grand Canyon’ by Pusifer.”

When writing new music is it a collaborative effort or is there a main song writer?
“Krow is the main songwriter for the band. She then takes everything to her producer BADDOG. He’ll twist, distort, add, take away, pull apart, and staple back together to give the penultimate version to the Electric Temple. The Electric Temple will then themselves add aural enhancements to the audio kitchen sink.”

If you could play God for a day – who would you make an angel and who would you send to hell? And why?
“Ooh! This is fun! I would send GOD to hell and I would give Lucifer his wings back!”

Do you have a message for fans of your music?
“A message for the fans of the music? Brace yourself. We have barely found our feet.” 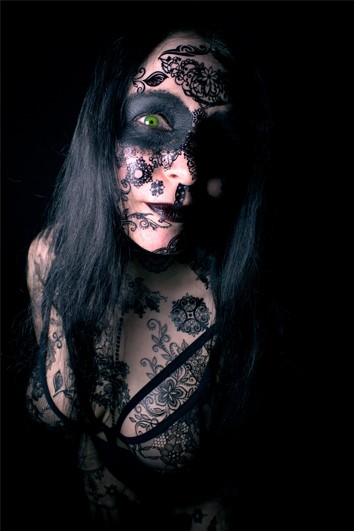 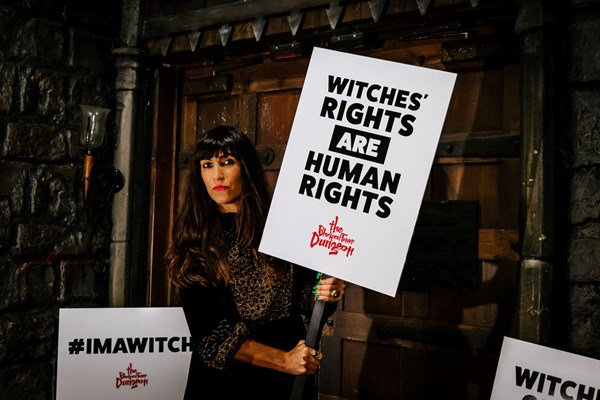 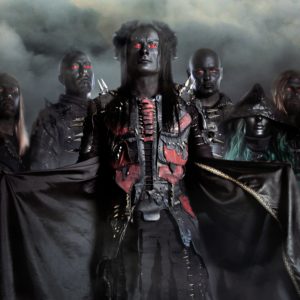 Cradle Of Filth Announce The Departure Of Keyboardist Lindsay Schoolcraft It is with a very heavy leaden heart that...
Copyright 2017 Devolution Magazine. All Right Reserved.
Back to top