Emily, Tommy, and Monkey from Rebel Station sat down with Mark Bestford at Rebellion to chat about concept albums, video game remakes and their dreams of touring within Europe

The festival you want to play

T “To be honest we’ve been meaning to do this for like, four years, and it’s been the sole point of it is that. We’d really like to do the ones up in Morecombe wouldn’t we. They’d be quite good. Any of the Calling ones and the next tick box we’ve got is the 100 Club as well.”

T “You want Glastonbury do you? Is that the backstage bit so you can chill, a bit of champagne.”

T “There are just so many, because punk’s got so many famous venues, even though so many are closed there’s still places that are just really well known, so go for those. So the 100 Club or go for some of the other ones. Sorry I just answered your question for you didn’t I? So Glastonbury’s the answer.”

Is the concept album dead? Nowadays everyone writes music to release on Spotify, so when you listen to an album on Spotify you cherry pick the songs that you want so the idea of an album like The Wall doesn’t exist anymore

T “No, I mean there’s some of the Who stuff as well. It would be lovely to do it, I mean Alice Cooper still does it.”

T “If you wanted to you could just put the whole thing as a single track on Spotify and take it or leave it.”

M “It doesn’t particularly sit well with our genre though does it.”

M “We’ve just released an album and there’s a bit of a theme to that in a sense. I wouldn’t say it’s a concept album.”

M “Yeah we’d get beaten up for saying it’s a concept album.”
T “Unless we have Stonehenge.”
M “Lifesize.”
T “Lifesize Stonehenge on it, that would be alright.”

Just don’t get the scale wrong

What are your future goals or concepts

M “Germany would be good.”

T “We’ve got a little fanbase in Germany and it’s just getting the contacts so that we can go for more than one gig. So getting outside the UK and doing some gigs elsewhere would be fantastic. I think Germany’s quite high on the list. Belgium’s a great place but it’s finding the places. Belgium’s got a massive music scene but it’s all like hidden amongst it all. You just go to a bar and here some rock, so that’s quite cool but it’s just getting to all the people to do it.”

M “And a second album at some point.”

E “My favourite’s already been done, Spyro The Dragon. I don’t know.”

T “I’d go Gauntlet. I know they tried to remake it, but Gauntlet in the old fashioned way Commodore 64 job, sit there with your mates and they say ‘don’t kill me we’re working together’ and then you let them die. And I thought that was a real good test of friendship was when you’d go ‘I won’t mate, I won’t kill you, oh you just got left by Death” and I’ve gone down the whirly hole. It was great. Gauntlet was a good one, that.”

E “I think I’m too young, all the games, you oldies.”
T “What was your first console?”

T “That was something new for me, I went years without anything and it was like, oh Commodore, and then nothing.”

E “I had a computer when I was little.”
T “Dune, that would be good, that was more PC gamer, but Dune was a great one.”

E “I used to play Doom and stuff, but that’s all been done.”

T “They just brought out yet another Wolfenstein and I quite like Wolfensteins. These days I’ve got a stepson and he just brings out Medal Of Honour and Black Ops and I’m like I remember this when it was pretty basic. I couldn’t play it now, I’m completely lost. Beyond me now.”

What TV show has you hooked

T “Just add Netflix.”
E “Yeah, Netflix, that’s the answer. The one that ruined my life was House, that I found on Netflix when I was ill one day. I don’t know how many series, eight series of like twenty-two in each one and I watched it in like a month and a half. It ruined me.”
T “That’s light, a month and a half, you could do that in a weekend.”
E “No, have you ever tried work?”

House is actually interesting as Hugh Laurie auditioned for the role and the guy who did the audition turned round and said ‘I’m really glad, I’ve finally found an American actor to play the role’

T “Oh no, but that’s a good sign, it shows he knows what he’s talking about.”

T “Stranger Things at the moment. Oh, Dark, that’s the one, it’s all timey whimey stuff but it’s in German but you can have it audio dubbed or subtitles, but I’d rather hear their voices and then read it underneath. So Dark’s fantastic, that’s a really good one to do. Or Stranger Things is the in thing really. I mean, are I say it, I like Glow as well. I discovered Glow really late and I was ‘female wrestling, woo’”

E “Just sit in the garage and play guitar.”

Your ideal headliners to support

T “Well we’ve done a lot of the headliners.”

M “I would say The Damned.”

T “Ruts are awesome, yeah Ruts DC would be awesome. We’ve done Vice Squad, we’re really good friends with them, really nice guys. Any time we go out with them and get pissed is great.”

Review the last film you watched

M “I can’t remember the last film I watched, I’m not really a screen guy.”

E “The last film I watched was Lion King, the original Disney because we’re going to watch the new one on Sunday. It was Lion King, it’s a cracker of a film.”

T “It’s Disney. The remake, why remake it? Remake it in our own life, what’s that all about?”

E “It’s great.”
T “I think I watched the Rock in the skyscraper one, that was the last one I watched. I thought it was going to be like Towering Inferno, and it turned out it wasn’t, it was the Rock doing his thang and swinging across a burning building to rescue his children, giving a mean stare. It was alright.”

The best practical joke on tour

E “I’ve not been on tour with you guys.”
T “No, we’ve just done individual things haven’t we. I did quite well falling off  a table last night, but it wasn’t a practical joke, that was just me being a twat basically.”

T “I’m always running about off stage. Last night I was upstairs in the venue at the ‘Tache which was the after show party for Rebellion and normally first song I’ll go out and I’ll go stand somewhere, today it was at the foyer at the entrance of Rebellion so I went right, I went down in the pub with my little wireless bass guitar. Went down, saw the chairs, jumped on the chairs. The pub was packed. Jumped onto the table, and it was one of those tables with a single column in the middle of it and it just went from underneath me and the whole crowd just watched as I went arse over tit, landed on there, saved the bass and then ran up the stairs again brightly embarrassed. And that’s probably my most rock and roll moment so far is nearly killing myself on the table and that would be an excellent way to end the band. How did it end? Well the bassist fell off a table and died. Oh, alright, okay, it’s not drugs but it’ll do.” 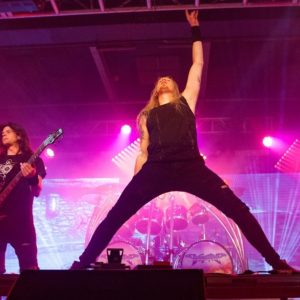