Suzi Carmichael (Turbulent Hearts) “Maybe if men stop assuming that a woman’s world revolves around their attention and affection, we can get somewhere.”

With acts such as The Distillers and L7 making well publicised come backs it’s easy to forget the bands that have taken up the baton and carried it in their absence.  Many will recognise Suzi Carmichael from the band Civet and she’s carrying on the feisty punk attitude with Turbulent Hearts.  Gary Trueman spoke to Suzi about the album that’s called a 3P and what 3B’s she misses most when touring. 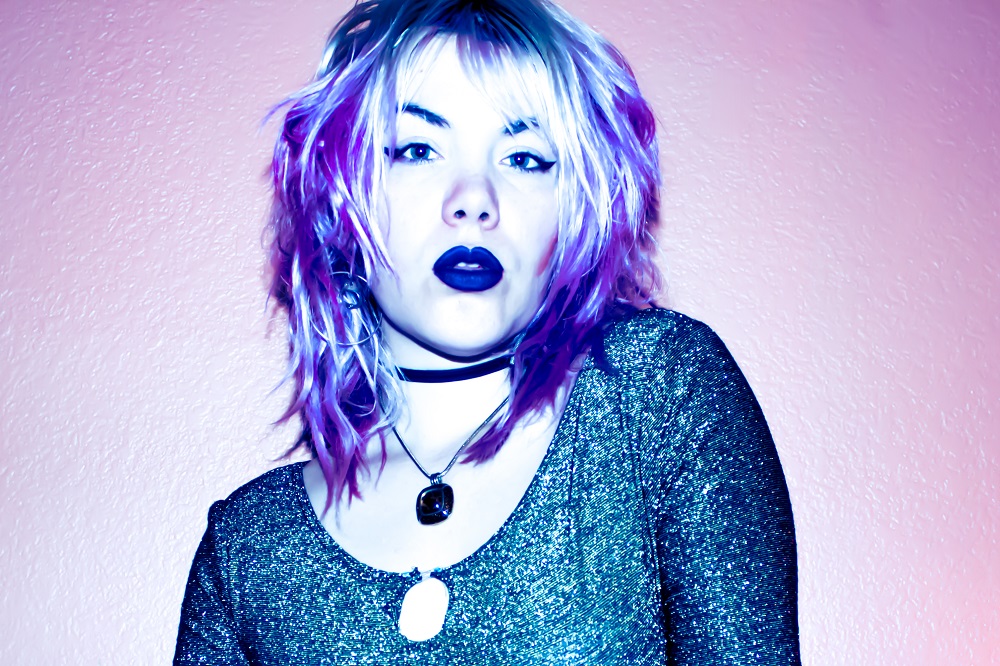 You’ve had your debut album out a while now.  How has it been received?  And have you had similar or different feedback from inside the US and overseas?

“ Well, its not actually our debut album, it’s a compilation of three E.P.’s that we self-released between 2014-2016. Also known as a 3P, ha ha! People seem to enjoy it, so that is really cool. I am writing for our first real full-length album right now and we are starting to record in March!”

You’re on Headcheck Records which is a UK based independent label run by Mark Sesin.  How has being on a UK label worked out for you as an American band?  Mark is well known and respected on the punk scene so has that helped you with getting your record heard?

“ I absolutely love being on Headcheck and adore Mark and his wife Lynn. They are the perfect label because they actually give a shit about the bands they work with and Mark is an honest music lover with a heart of gold. I feel so lucky to be represented by Headcheck and it has really opened us up to a wonderful scene that has welcomed us more than any other!”

Do you write as a team or do you have a specific writer/lyricist?

“ I wrote all of the songs on the 3P, I’ve been writing since I was 13, but still there is a next level that happens when you bring these song skeletons to your band mates and I never tell anyone what to do on their own instrument. We always suggest ideas but once you’re sharing it with other creators like that, like, so fun because it comes to life even more… And don’t even get me started on the studio/recording stage! I love it. My one rule: Keep it simple.”

You’ve just released a new video ‘I Don’t Do It For U’ which is pretty upbeat musically but has an important message.  Maybe one that guys ought to take notice of?

“ The song is not directly aimed towards guys, actually… It’s a personal anthem about owning your life and living it for yourself. “Baby, I’ve made a lot of mistakes but each one was great.” – That is about all of the failures you inevitably have to experience while on your journey to greatness. Stumble and fall, get up again. And when I say “I’m leaving you today” – that could be a bad job, an abusive relationship/friendship, an eating disorder, a drug addiction, shopping too much or whatever else distracts you from being your best self.” 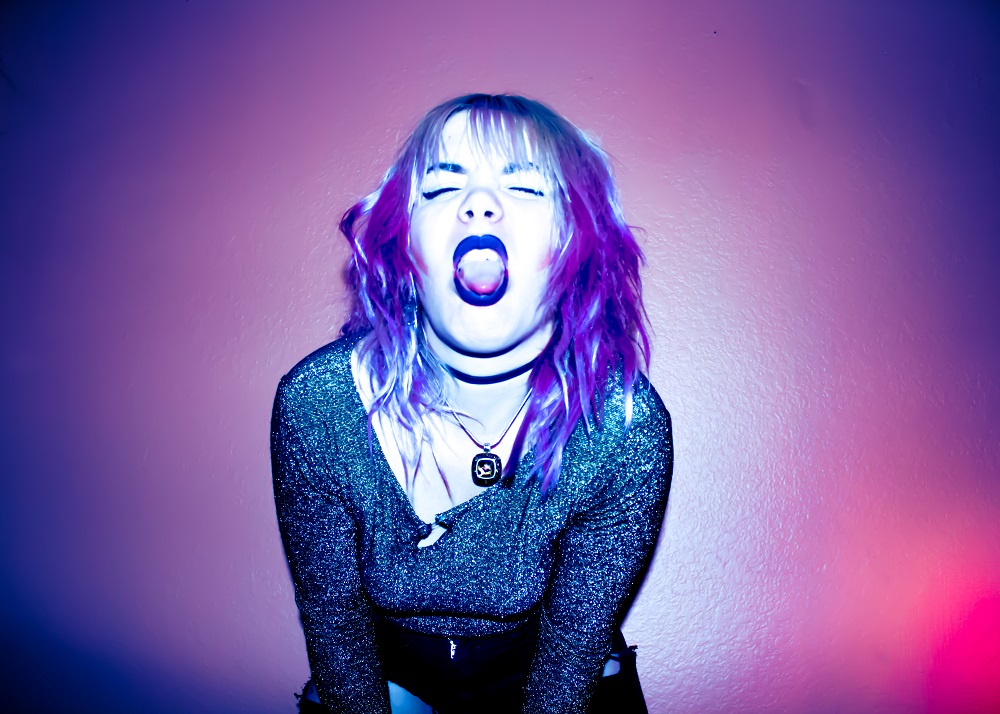 Which brings us along nicely to the punk scene and how women are represented generally in music.  Punk does seem to be more encouraging to female musicians than most genres but there’s still a lot of misogyny under the surface.  Have things improved while you’ve been playing?  How does the US compare to the UK in terms of how women musicians are treated?

“When will men stop asking female musicians this bummer of a question?  Maybe if men stop assuming that a woman’s world revolves around their attention & affection, we can get somewhere.”

Have you been playing a lot of shows in the US.  How have those gone?

6 shows in LA in the last 6 months doesn’t quite feel like enough to me… I would really like to be able to take this band on tour across America and uh, the rest of the world!! All of the shows are special in their own way… You never know what direction its gunna go.

You played Rebellion festival last year and are returning in 2018.  What are your thoughts on the festival and about coming back to play there and to be playing some other shows too?

“ You have no idea how freaking excited I am to be back at Rebellion! I am honored to be on the bill and can’t wait to see all the bands; it’s a really cool experience! I’m very stoked to see PiL, Buzzcocks, and the home girls Bad Cop/Bad Cop. We are gunna have some other shows around the UK as well, then head over to Germany for a festival!”

When you first came over to the UK was it a bit of a culture shock or exactly as you expected?  What’s the worst thing about the UK?  And the best?

“ I love England! I’ve been here on tour a few times before with my old band Civet, so it actually feels quite familiar to me. I can’t think of anything that I don’t like, but my favorite things are the great shopping, yummy veggie curry, and cute punk boys!”

What’s the weirdest thing you’ve found when you visited the UK?

“Blood sausage in Scotland will haunt me for life.”

When you’re touring what do you miss most from home? 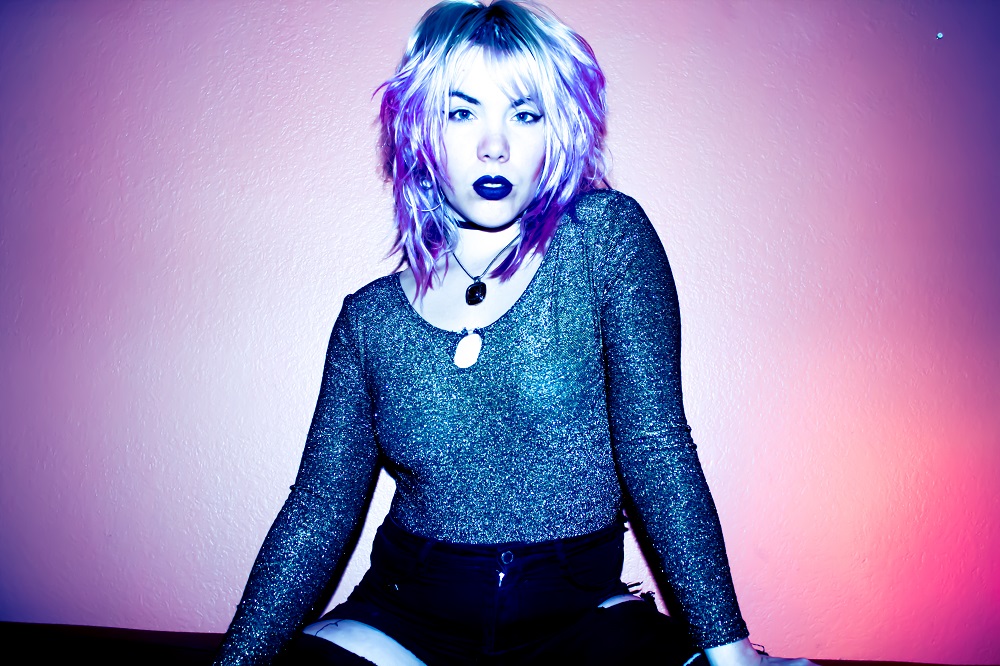 What’s the one non-obvious thing you have to take on tour with you?

“Gotta travel with apple cider vinegar, coconut oil, and good face wash. I don’t have any charms or weird things I take… an eye mask for sleeping? Is that non-obvious? I’m pretty low maintenance in that sense, I mean, if there’s something I need I’ll get it. I’m just happy to make it there at all!”

Do you have any phobias or quirks?

“Funny enough I hate flying and even typing that and thinking about our flight to the UK in July makes me extremely nervous! I’m not sure what my quirks are; I probably have some, though.”

If you could go back and edit your past is there anything you’d like to change?  If so what would it be and why? 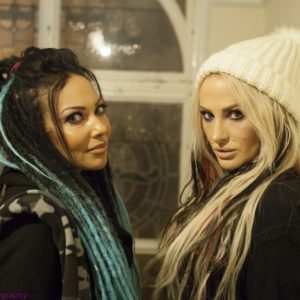 With latest album Lilith wowing fans and critics alike the Butcher Babies are on a roll right now.  Their live shows are gaining...
Copyright 2017 Devolution Magazine. All Right Reserved.
Back to top