Every once in a while a band comes along that sums up the mood of a generation and pushes music in an new exciting direction.  The Sex Pistols frightened the life out of the establishment in the seventies.  Nirvana took a sword to hair metal in the nineties, rejuvenating rock music along with the grunge revolution.  Now well into the twenty first century we’re seeing acts that combine music with real visual presence and a savvy knowledge of the art of video making.  Death Koolaid have taken old school death core mixed it with punk rock energy and given it a groove a mile wide.  They also look super cool and make ground breaking videos.  So much so they really could be the next big thing.  Vocalist Siren Sycho and guitarist Roy talked about their Volume 2 EP and body swapping with Devolution’s Gary Trueman.

You second EP came out in September.  What was the thought process behind it and what was it like recording again?

Roy:  “As a band this is probably our first effort all together.  With the first one we just wanted to get something out there because you need some ammo to give to people.  We were happy with it at the time and it said what we wanted to say.  As soon as that was out we started writing again and this is definitely more of a band project.  I think the sound and the tone of this one is more the way we want to head.  You can tell from listening to it that it’s a more cohesive piece of music.  We gigged with the songs quite a bit before we recorded so we ironed out quite a bit. It took longer but it is a seven track so more of a mini album.  I don’t think you can listen to more than seven Death Koolaid songs to be honest, without your mind imploding.”

The song Emmeline has a lot more groove to it than anything you’ve done before.  Was that a deliberate move towards accessability or was that just how it turned out?

Roy: “It was just how it turned out.  Like most of our songs it’s just us jamming really, mainly me and Crossy (Crossman – drummer).  With this it’s important it has groove, even heavy music should have groove, you should be able to dance around to stuff.  Emmeline is a very groovy song and it just goes into the extremes of heaviness in the main chorus.  I wouldn’t say it’s so different, it still has our tone in it.  Maybe it’s the most poppy thing we’ve done, more accessible, but then I think this whole album is more accessible.”

Siren: “Emmeline is mainly about people having strong opinions but no one is willing to actually listen.  I think this is particularly to do with the Internet. There are so many voices out there, but because of the heavy quantity, many get lost and no one ends up listening to anyone.”

You’ve mentioned Crossy who has moved to Bristol and got married.  Is he still in the band?  Do you have another drummer?

Roy: “Yeah he’s still in the band.  I guess we’ve got a drummer to suit every occasion now.  If we’ve got any gigs that he wants to play then he’s going to play them and we’ve got another drummer called Nick who’s going to be playing on the gigs we’ve got coming up.  Everything is cool, everyone is happy with the situation.  Me and Cross write all the songs.  But yeah he went and got married the motherfucker!”

So you guys do the music and presumably Siren does the lyrics? Roy: “From the last one she was writing as we were going, she based it around the music so she knew what she was doing.  The first EP was disjointed a bit but Volume II she wrote for it as we were developing it.  She does have a reason for writing a lyric for a particular song.”

Lyrically do you find certain subjects fit the music easily because of how heavy it is but other subjects  maybe don’t fit so well?

Roy: “Not really, I’d be happy to sing about anything so long as you care about it.  You can sing about global catastrophies or something that’s personal to you on the day you write it.  I don’t think it has any relevance to the importance of the song.”

Siren:  “I’m not going to write about lolly pops and unicorns though, I lean towards writing more about the raw, underbelly of life full of dirt and gritty issues.”

Your videos are very creative.  Clearly they’re a good way to communicate a song?

Roy: “Our videos are very important to us.  We wouldn’t be happy to have just some generic random video, they have to do something or say something a bit different or in a different way,  But we are an unsigned band who are skint so we can’t afford a massive production but we try to keep it as high as it can be for the money we spend on it.  It’s important to us.  It’s doesn’t have to look like a Hollywood film but it’s done for the idea.”

Sometimes the simple ideas can be effective though like the children in slow motion in the ‘Kids’ video.

Roy: “Well they say never work with animals or kids and we’re animals and they were kids so it was a fun day.”

Siren, you not only sing in Death Koolaid but also model.  Do you use the same make up style for both or is it different?  What’s your one essential make up item?

Siren: “I tend to go a bit darker for my stage make-up than when I model, although it does depend what the modelling is for. When I’m doing my make-up before a gig it also depends how much time I have, recently I’ve had to do my make-up in the car ride over to the gig when we play out of town which you need a particular skill to do as the car will be bumpy and having a steady hand is key. I guess black eye liner is my most important tool.”

What are your aims for 2017 and onwards?

Siren: “Hopefully we will be getting some proper PR, management and a booking agent in place so we can get good support slots on tours and get on festivals.”

When you’re writing and different ideas are floating around do you trust each others judgement on what works and what doesn’t?

Roy: “I dunno because if one of us likes something pretty much everyone else will.  We’re scared to say something sounds shit.  If you think it sounds shit then it is so why play it?

Siren: “I think so. Sometimes the others will tell me when some lyrics may not fit as well in places so I’ll re write them to fit better. I’ve told Roy to maybe cut some riffs down so they aren’t so long – just stuff like that.”

What were you like as kids and do you think you would have got on even then?

Roy: “I was a bit of a trouble maker as a kid so I don’t know what she was like but I was a brat.  We used to live in the countryside so we used to get up to mischief.  Musically speaking I think we would have got on OK.  I actually started playing the drums when I was twelve so that was a big part of my musical background.  I hope she would have been down with some drum playing.”

Siren: “I’ve been in bands since I was 15 but if the rest of the band were the age they are now and I was that young, the age gap would be a little tricky – I wouldn’t be allowed in most pub venues to even play ha!”

If you woke up in each others bodies after the initial shock what would be the first thing you’d do and what do you think the reaction would be once you’d swapped back again?

Siren: “Um… well Roy eats a lot of really shit food so I’d get some salads in me being him and then sit in a dark corner and cry for a bit until we swopped back. I’d be pretty grateful to be back in my body after that.”

Roy: “That’s a weird question.  I’d be thinking I’ve got to sing and I can’t fucking sing.  It would be funny if it happened before a gig.  I’d laugh at her because she’d have to play the guitar and she can’t play.  I’d probably just scream my head off.  It’d probably be exactly the same to be honest, exactly the same gig, just noisy guitar and loud screaming.  When we swap back.  Well she doesn’t really drink and I drink so she’s going to wake up with a hangover and she’s going to be pissed off.  I’d say that’s what would happen.”

Spotlight: Prong Jewellery "Prong is for the power dressers" 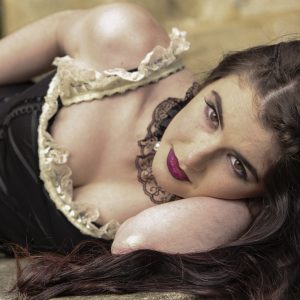 When it comes to weddings it’s not only the bride (and groom) that have to look the part.  The bridesmaids have that...
Copyright 2017 Devolution Magazine. All Right Reserved.
Back to top